(PORTOVIEJO ECUADOR)  Preparing for this second show of the Mola Series should have been a simple task, but—!  It’s not that things went wrong; just that things didn’t flow the way they were planned!  Instead of ‘one day to set up and one day to show up,’ the hanging of the show took the entire week, which meant one hour to Portoviejo via bus each day, and one hour back to Cruzita, then work at night on other tasks that I’ve been neglecting.

On Friday afternoon, the various members of the press arrived and enjoyed learning about the Kuna Indians, the history of molas, and how they influenced this series.   The museum staff and guards were equally curious and supportive!  They particularly enjoyed the tromp l’oeil geckos and butterflies that accented many of the paintings! 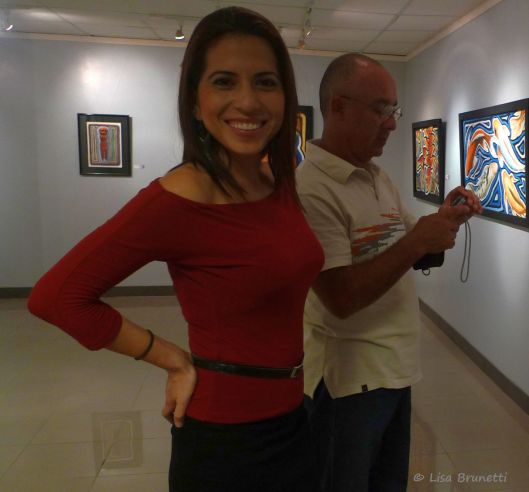 38 hours in full-throttle mode with one hour of sleep,  I was exhausted yet happy to pose with new friends!

After a weekend of rest, I’ll be dividing my time between the museum and Cruzita for the rest of the week.  It feels great to sit back and say, “Ahhhh!”

Thanks, everyone, for your genuine support!    Z