Living immersed in Costa Rica’s tropical dry forest, I cherished my time with the howler monkeys.  I was as curious about the howlers as they were about me!   They often slept in the canopy above the roof of my studio.  Some mornings they slipped away with stealth-like silence; many mornings they announced the arrival of the sun with their unique roars, then settled into a quiet contentment.    Every so often they continued to roar until I came outside and greeted them in three languages:  “Buenos dias!  Good morning!  Umf, umph, umf, umph, umf!” 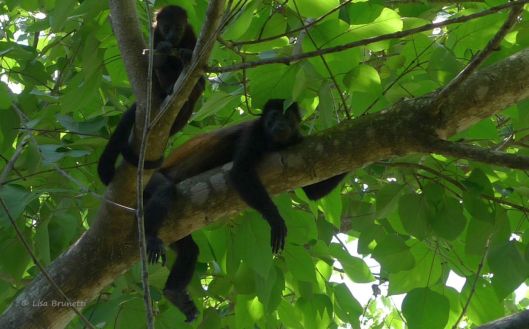 At times they shadowed me from their treetop vantage point like devoted watch dogs and monitored my every move.  Often I would look up to see a cluster of monkeys draped over the limbs and gawking down at me!   I often gawked up at them as well, and we shared a curious appreciation of each other!

I sometimes called out to them, “I am going back to the house now!  See you in thirty minutes!”

Almost always with an unhurried attitude, they followed me!

He sails through the air with the greatest of ease! (Costa Rica Howler Monkey)

Once while working on a painting, I heard an unusual crashing sound.  I paused then thought, “MONKEY!  A monkey fell from a tree!”

Bolting to the nearest window, I peered out to see a monkey slowly climbing up a small sapling.  He then crossed to a larger tree and climbed just high enough to rest.  For half an hour he clung tight to the tree, then slowly worked his way back to the others. 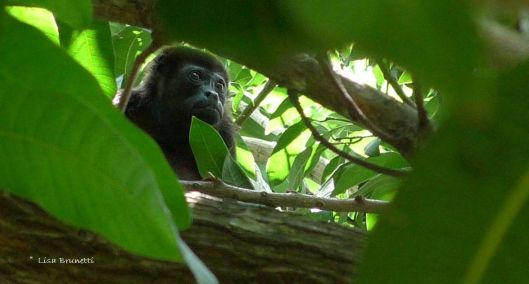 “Who Taught Her Our Secret Language?” Curious Howler Monkey 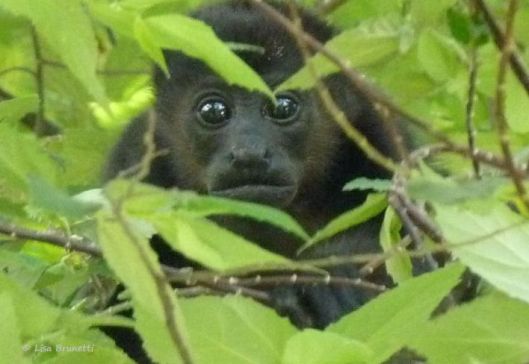 “Will You Teach Me To Speak English?” Cultural Exchange – Costa Rica

Over the years, I learned the nuances of their communication.  To the adult howler’s shock, I could coax the young ones to within several feet of my reach.  The adults often coaxed them back with panicked retorts!

I am grateful to have had a cultural immersion in the land of the howlers; when away from the tropical dry forest, I miss the howlers!

For more images of wildlife, see this week’s Wild Weekly Photo Challenge.  Tip on over there and participate in the people’s choice voting. or belly up to the bar and join us with your own nature photos!