“Welcome back,” a straight-faced immigration officer often says when he returns my just-stamped passport.

Those two unexpected words always touch my heart, and I reply with a heartfelt, ‘Thank you’ and legally enter the United States of America.

Are the agents required to say that to all returning citizens, or am I just lucky to be greeted with those words?

After placing my passport back in its proper place and double checking the boarding pass gate details for my connecting flight, I proceed to baggage claim – if needed – and then follow the maze of signs.

While preoccupied with flight arrivals and departures, one rarely has time to notice the other travelers and workers in the airport setting. Many times when I step on that ‘this will get you there a bit faster’ moving-floor option, I always look at my fellow travelers. Few people are smiling. When eye contact is made, I quickly smile or grin before they have a chance to look away, as if one might be arrested if caught interacting with a stranger!

There are other reasons to stay serious while navigating airports; those little bullet trams demand intense focus – to confirm you’re getting on the right one as a computerized voice reminds you to stand away from the door. Most of the people seem catatonic, as if any personal interaction might cause them to fall from the tram or miss their flight.

Long long ago, a 4-H judge awarded me top prize in showmanship after my ‘runaway steer’ pulled me around the arena. The judge quietly said, “Honey, don’t you EVER lose that smile.”

Realizing that I am also caught up in the hamster cage, I release that clenched-jaw tension and smile. I smile to remind myself that the world will not stop if I miss my flight. I then try to pass that smile to others and remind them to savor the moment. To watch someone’s tightened expression suddenly transform into a light-hearted smile touches my heart. There are times when a tired irritable toddler refuses to stop crying. When possible, I look into his/her eyes and ask, ‘Hey! What’s wrong? I’ll bet you are tired. Or hungry.’   That almost always halts the crying, and the child adjusts to the unexpected encounter (distraction!) with the stranger.

Surely these children were obediently sitting with orders not to move! They did not want to smile either!

If English is not their primary language, I then start chattering in English, and the child looks at me as if I am the star attraction of the circus! I talk for about a minute, then tell the child, ‘Goodbye!’ and go on my way. Almost always, the tears and heavy heart are forgotten, and the airwaves remain blissfully peaceful as the child and baffled parents wonder, ‘Who was that grinning woman?”

Some days my inner smile expands so much that I wonder if my heart might burst, and during those times of self-inspection, I worry that I might cry. Why is it so easy for me to find joy in the everyday experience of Life, and why is it so difficult for others? I do not know why, but I am grateful that through the random luck of the genes that make me ‘Z’ – I have evolved into a very happy person. 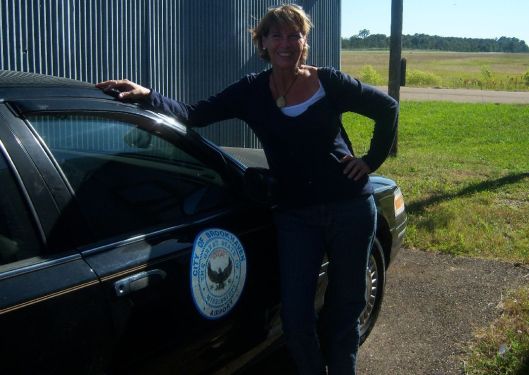 2011- Brookhaven Airport (Mississippi) Surely the man didn’t just say, “You can use it as the courtesy car”!!!

This next month I will be traveling back to the alluvial flatlands of my childhood – the Mississippi Delta and surrounding area.

Atypical of my usual WordPress writing style, I will be observing and recording my thoughts with pen and paper and will pause every so often to transcribe and share with you. A month is not a long time when the circle of my loved ones stretches from the Gulf Coast to Memphis, across the Mississippi River to Little Rock Arkansas and back down to Natchez. There might be a side trip to ride with my sister from Dallas to Mississippi.

I grew up in a tiny community called “Bolivar,” once a booming saloon town along the river. The river channels changed, and like so many other ‘landings,’ the town shriveled and basically died.  The new town of Benoit evolved when the railroad came through an area three miles to the east.  With a population of three to four hundred people, Benoit eventually dried up as well.  Unique towns with similar fates dot the Delta, and others have found ways to hang on and sometimes prosper.

Throughout the month I hope to visit many of these towns- Yazoo City, home of Zig Zeigler and Willie Morris, Itta Beena, home of BB King, Inverness – Little Milton, and Belzoni, home of ‘Grandma Moses’ – E. Mohammed; Greenville – home of historian Shelby Foote, the Hodding Carters and William/Walter Percys and the highly-talented Steve Azar (Who sings about many of the places where I grew up.); the creator of the Muppets, Jim Henson was from nearby Leland.   I grew up in Bolivar County, not far from Greenville and Leland and the Winterville Indian Mounds — just north of that landmark along Highway 1 is the county line and the farming community of Scott, the site of the 1927 Levee Break, explained so well in John Barry’s “Rising Tide.”  The ’27 Break is a story of its own, best told with soon-to-be-taken photos and current information!

Sports fans would remind me to mention Drew’s Archie Manning, Cleveland’s “Boo” Ferriss, and my own personal favorite, Satartia’s Rod Barnes, the former Ole Miss Rebel star who later became head coach and took the Rebels to the historic Sweet 16 finals in 2001…

Poverty reins in most of these tiny communities, and I will be seeing many of them as I travel up and down Highways 1 and 61. Many of those towns have Indian names – Hushpuckna, Satartia (pumpkin patch) – and there are other Biblical names like Beulah and Egypt Ridge. Towns like these are often featured in news reports about poverty/racism/obesity. During my visit and travels, I will be looking for glimmers of hope – for some jewel of something positive, and I will try to see my state through neutral eyes.

Before moving to Latin America, I often boasted that Mississippi had evolved beyond the extreme racism that the press and big screen often projected to the world. I moved away and met people from other countries who would say, ‘Mississippi? Yes, I know of Mississippi – Mississippi Burning.’    Before weaning away, I was part of the cast and saw only through the vantage point of my idyllic role where I spent carefree summer days growing up in a Tom Sawyer-type childhood. Both races observed unspoken rules. We had dear friends who were black, but it was not often that we went to dinner with them or invited them for dinner. Now, through my more-traveled eyes, I am ashamed.

Yep, That’s Z on the Mississippi River levee and feeding her horse a birthday cake… Thanks, Andalyn Reese for the image!

After moving to Latin America, I slowly viewed my country and my state through foreign eyes, and many times I was ashamed. Racism is still very alive and thriving in the hearts of some. Remarks about ‘White Trash’ are flippantly made with no empathy for those who have little. Surely there is an equal-number of people who are actively making a difference and not suffering from apathy.

(Rivas Nicaragua) For years I assumed he was a homeless drunken bum. One day something nudged me to ask, “He’s not a drunk, is he? He’s smart.” I was told, “His name is Maestro Gabriel; he was once a respected teacher. Until an earthquake happened and the roof fell on his head. He’s been crazy ever since.”

Apathy also spills over into one’s attitude about health. Mississippi is also associated with obesity. Why aren’t more people proactive with their health?(This is a world-wide problem.) Instead of fixing the problem, some pop their daily pills without changing diet or lifestyle. I’ve asked, “What are you taking?” and once the answer was, “It’s for cholesterol,” yet there was no attempt to alter the unhealthy diet. Sunday dinners of fried chicken, field peas, lima beans and buttered biscuits and gravy do not make people obese. (Ha! I just dined on cornbread, cabbage, fresh corn and fish!) Seven days a week of high-fat cuisine and little exercise does promote extra weight, as does sitting for hours in the evening and watching ‘empty-calorie’ television shows.  (HUFFINGTON POST:Binge-watching TV.). 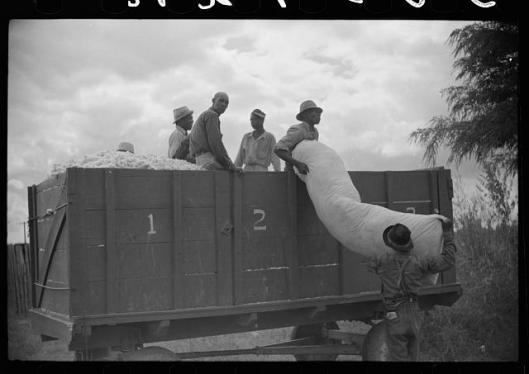 1935 – Library of Congress – Near Benoit Mississippi

I look forward to seeing my loved ones; I look forward to viewing that majestic Mississippi river as often as possible and seeing the cypress-lined oxbow lakes dressed in their fall foliage. Most likely I will see fields and fields of cotton ready for harvest, though “King Cotton” has been replaced by alternative crops on many farms.

2012 – Life in Manabi Ecuador reminds me of that long-ago cotton-farm life.

Xavier at another area of the cattle headquarters.

Nostalgia – I hope to see old farm buildings, part of vanishing America, and to smell the unique aroma of pecan trees as they drop their foliage and those hard-to-shell nuts. Then I think of chocolate fudge packed with pecans – that’s one dessert worth every ounce of sugar! No one’s fudge was as simple and delicious as my father’s, and I fear that his unique recipe died with him twenty years ago. “It’s the recipe on the box of coca powder,” he would often shrug. I tried many times and never mastered that recipe!

Boots are easily found in rural Ecuador, but running shoes are more difficult to find!

I look forward to seeing book stores in every town and walking into public libraries and inhaling that unique aroma of old books. Art supplies – wow, perhaps a ‘donate’ button on the sidebar will help finance the art-supply buying binges! I will be able to buy new clothes that fit! I am quite tall (5’8”) compared to the average Latin woman. Running shoes! There will be large selection of running shoes – and good cling-to-the-foot socks.

Burrito with external keyboard and colander to amplify the usb modem’s signal.

Little Burrito laptop will finally be put to pasture as soon as I peruse and select a new foal from the corral of new computers. Windows 8? My friend Cynthia warned me a few weeks ago about Windows 8. I was not aware of the newest version of Windows! Another gadget I hope to find is a night-vision home security system. I will not only be able to see the fishermen (shhh!) during the night, but I will also be able to identify the nocturnal animals that forage along the riverside and in the gardens.

There are social events on the itinerary – reunions and weddings – goodness I have no idea what is considered ‘in fashion’ right now, though one friend recently remarked, ‘I have never seen you in a dress…” (I haven’t seen you in a dress, either, Amiga!)

This time next week I will be in total cultural immersion back in Dixie. For someone who spends long segments of time in solitude, I fear there will be an ample dose of reverse culture shock.