“Wherever there are birds, there is hope.”
― Mehmet Murat ildan

Jama, Ecuador –  Arriving in Jama just before dark, I was happy to see Luchy Cevallos unloading items from his car at Palo Santo Cafe.  “Lisa!!” he smiled, “Come in and have a cafe!”   I accepted on the condition that I share the tasks before they opened at 7.     He also prepared a pizza that we shared, and then he dashed to the cabanas to prepare #3 for me to spend the night.  Yay!

Business was brisk, and I suspected that each dime would help with repairs on his hostal.   When I left at ten, people were still visiting while enjoying good food at a very fair price.

I also took photos to compare before and after, so here’s an ‘after’ photo taken in front of Palo Santo…

Compare the photo above with one taken a few years earlier: 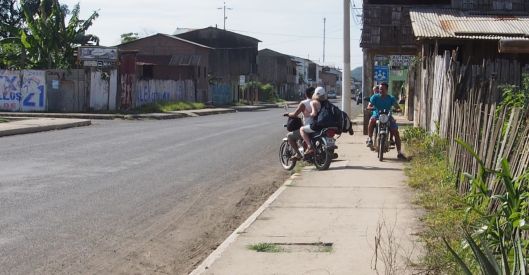 Jama before – (Wear White for Peace)

Turning back time to 2008:  How well I remember walking the lazy streets of Jama as if I’d stepped into a time warp from my childhood.  Cowboys nudged their cattle along the streets at the end of the day.     The town slowly changed over the past seven years, but the April 16th earthquake turned Jama and neighboring areas upside down.

Many have shared their stories.

“…It began like the usual earthquakes – starting slowly, and we became aware – Earthquake – and assumed it would be finished in a few seconds. But it didn’t, and the slow subtle start sort of tricked us…   I was in the street outside my house when it happened… first it wasn’t scary – it was like a normal earthquake and then it got stronger. One house fell and then another and another… and I looked at our house and thought, “Please don’t fall…” – and it didn’t….   A few more minutes, and I think the house would have fallen down.”

A friend who makes my picture frames said this, “Our house is fine, but at night—” (he chuckled and pointed to the shop) “… we sleep there….”

Some landmarks remain- Jama after earthquake

Many go through the day with no problem, but at night, the memories and fears return.
“I slept in my truck for weeks…”

“I slept in my car for four or five days…”

“Did you see Jama when the houses were still in the street?”  (This person pulled out his phone and scrolled thru images taken the days following the earthquake…)

Today a special mission trumped other tasks.  Stiking out on foot, I began asking people in the neighborhood where my friend Arturo lived.  His home collapsed the night of the earthquake, and his wife/my friend Chana, did not survive that night.

The walk was a sobering one, and tents often claimed spaces between houses that remained standing.   “I remember your old house,” I said to one couple, “It was a very nice house… lo siento.”  They seemed happy to have survived the quake, and they are now living in a much-smaller one-story home.

While walking the back streets, this ‘Coralito’ vine added a touch of beauty to the drought-striken and extremely-dusty neighborhood.   (In another month, the rains should resume.)

After several people pointed me down a second dusty street and ‘a-la-direcha’ at the next corner, I spotted Arturo sitting on his son’s front porch.   I found a much-slimmer version of my friend, and he seemed happy to see me.    He said that he remembers little from that night, but received several knocks on the head and was taken to the hospital in Guayaquil.   I asked no questions about Chana, except to give my condolences.

As we visited, we watched a cluster of women playing bingo outside the home.  They seemed to enjoy passing time while the sound of heavy equipment provided an intrusive soundtrack.  Behind the ladies at the corner, a barber trimmed the hair of one customer while another patiently waited his turn.   Children zipped from house to house, and several were curious about the gringa that paused to visit with them.  “Where are you from?” they asked, “…did you feel the earthquake?

Two of the pre-teen girls escorted me to the corner, and we talked a bit longer before saying goodbye.   I paused to photograph some doves, then peered at a house that had seen better days. 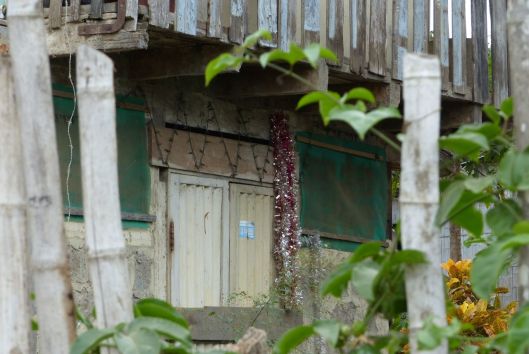 Christmas garland and lights – signs of better days from the past… 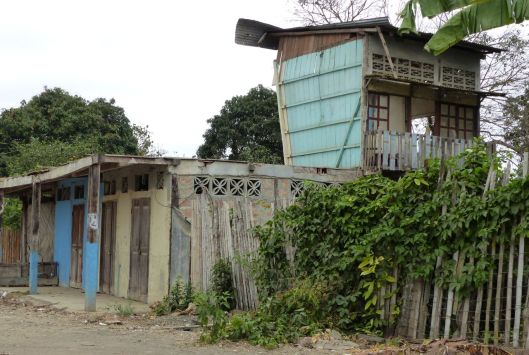 Across from Palo Santo

Palo Santo from the street…

Returning to Palo Santo, I reminisced how Luchy’s lovingly-tended hostal had matured over the years.

After the earthquake – Little by little, repairs are made… 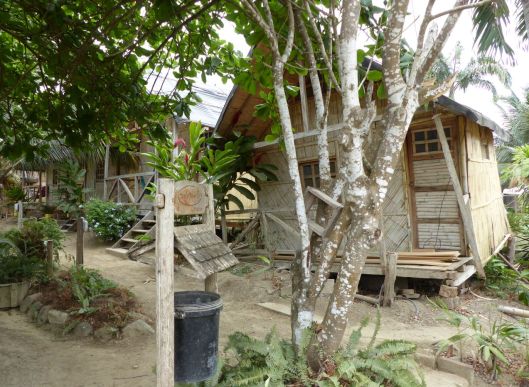 Some repairs take time, but money for labor is doled out slowly…

Luchy and I talked, and there are eight cabanas that need new roofs and insulation.  Each cabana roof needs 20 sheets of material and 10 sheets of insulation.

We tossed around some ideas and came up with a plan:  Volunteers for one work week (Soon!)  We’re looking for 8 good men (Or strong women!) who can work on roofs!

He has four cabanas that are now safe;   each cabin has one twin bed and one full –  so he could accommodate 8 volunteers.   He would provide breakfast and lunch and of course a place to sleep.   Is anyone free to come help for four to five days?    I volunteered to be the cook, as his mother and grandmother are in the USA….

Material costs for each roof will be about 500 dollars.  If anyone would like to sponsor a cabana, he’ll name the cabin after you!  (I’ll be happy to paint the signs!)

Let’s see if we can make this happen before the rains return!

Thanks for any feedback!