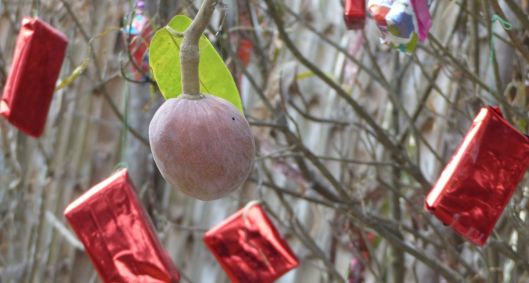 “Suffering is part of our training program for becoming wise.”  Ram Dass

(Jama Ecuador) After traveling for 5 or more hours, I recently reached Jama in the late afternoon.  Palo Santo Cafe was closed, but someone was inside – preparing for the night.  I knocked on the door and asked if I could use the internet – to send a smoke signal that I’d reached my destination for the day.   “Of course,” lovely Karen smiled as she opened the door and invited me inside.  “Stay as long as you’d like…”

I sat at a table and quickly vanished into cyberworld while they worked in the kitchen.   Just as I was packing my things to leave, young Jesus – Luchy’s nephew, motioned for me to stay.  He pointed to three coffee cups on the counter and whispered, “Shhhhh…”     Smiling, I unpacked the computer and played my role in the coffee break surprise..   Yet ten minutes later, the cups of not-so steaming coffee were still sitting there, and I thought perhaps I misunderstood.   About that time Luchy and Karen emerged from the kitchen with hot ham and cheese sandwiches for everyone! 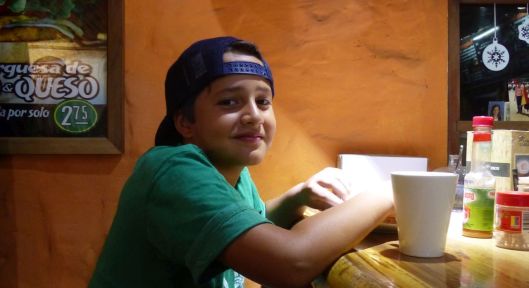 Jesus, Luchy’s nephew, often helps (with a huge heart and grand smile) at the restaurant.  He prepared the cafe con leche, garnished with an artful swirl on the surface!

These palms line the front of Palo Santo…

I camped at their hostal this past trip and enjoyed more quality time not only with the family, but with many of the locals as well.   One night when I was walking from their restaurant to the hostal (2 blocks) someone called my name.  It was a friend I’d not seen in over a year.  She and her four precious children are living in one of the tent communities.  She looked great and seemed happy, and we both enjoyed the 10-pm exchange on the almost-deserted street. 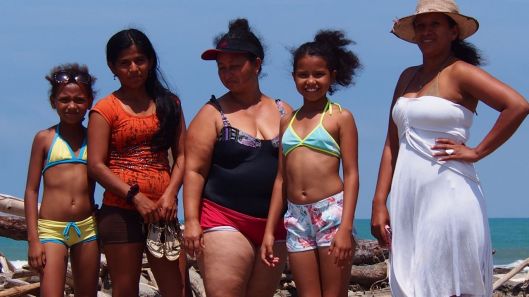 Photo from better times – before the earthquake

“When someone feels particularly isolated or in pain, we don’t need a great deal of information in order to come to his or her aid.”  Ram Dass 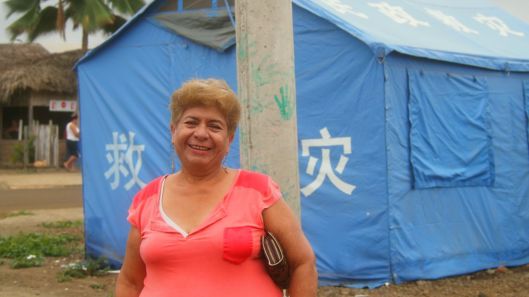 Another day when I was buying ‘takeout’ encebollado for breakfast, someone on the street called, “Lisa!”    Many times as they share their stories, they release a bit of their noble and very private pain. It is true that tears are the escape valve for the heart.

Back at Palo Santo, Luchy’s brother and nephew enjoy an end-of-day father/son outing near the hostal. 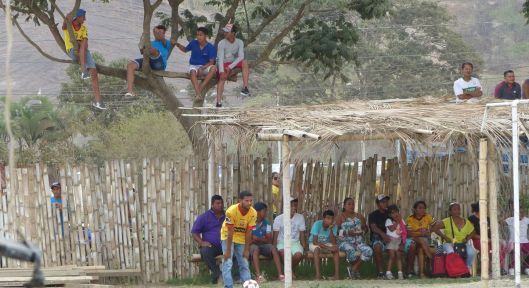 A few locals found a convenient spot to watch the futbol championship game!

My friend Xavier played in the final game. His team lost, but everyone played well! 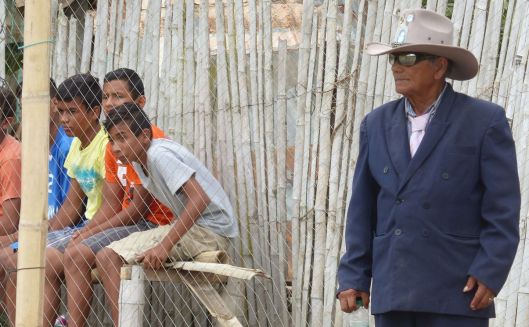 Although each person has his or her unique story of the night of the earthquake, they are all moving forward with esperanza/hope for what can be done with each day.

In another part of town, I stepped into ‘Papelito’s Corner’ for ceviche – as invited several hours earlier…

How proud he was that I showed up, and he promptly served the bowl packed with marinated fish and lobster!  ‘Sit!’ he said, and brought chifles (Plantain chips) and Cocacola.

A second person (who works on the shrimp farm by Casa Loca) joined us… table for one became table for three!

We were stuffed, but reminisced about ‘before and after’ the earthquake. We mentioned Chana, whose tienda was half a minute’s walk from Papelito’s.  Her death affected all of us.

(He refused my money and insisted that he prepares food each Saturday for his friends.) 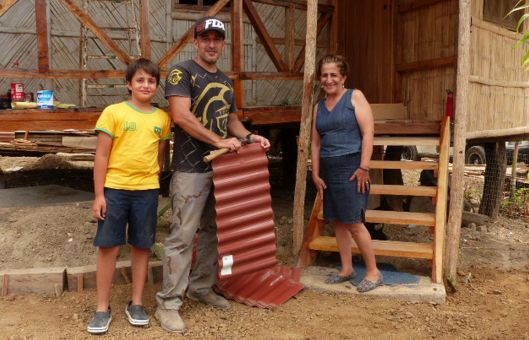 Back at Palo Santo, I asked Luchy to pose for a photo as a token ‘thanks’ to the people who contributed to his roof-repair costs. Pictured also are his mother and nephew. (Nieve and Jesus) 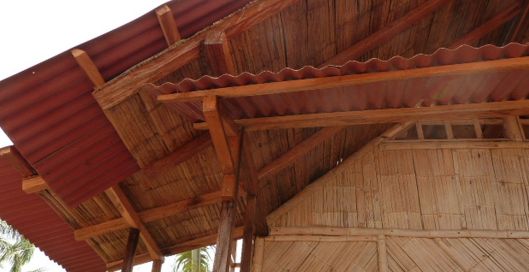 Here’s one roof that’s almost finished… the material on the underside and on the walls is ‘flattened’ sections of bamboo.

And here is one roof that is awaiting repair… 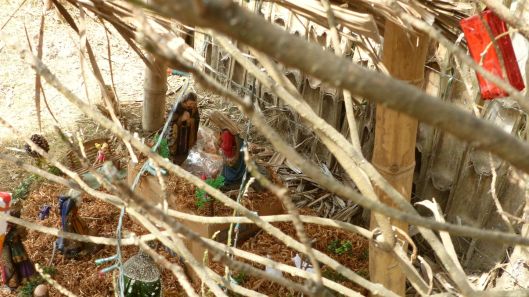 Nieve and I drove ten minutes ‘upriver’ to see their farm.   I was rewarded with a lovely new bird – an Ecuadorian Trogon!

Ecuadorian Trogon with Yellow-rumped Casique in the background… 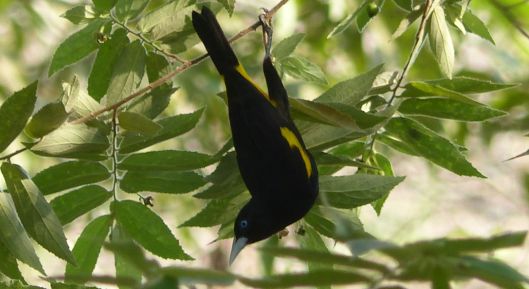 One day I noted a new face at the hostal, and I asked Nieve about the precious boy that was quietly observing from the doorway. 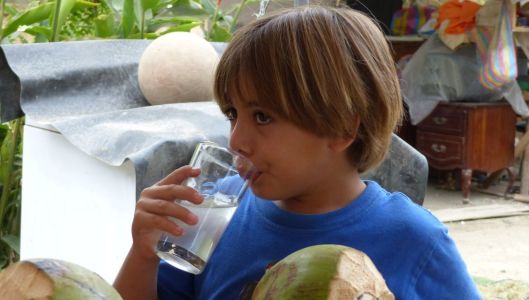 That’s Luis,” she said and then added, “his mother died in the earthquake.”   He watched me with a neutral stance as if wondering what I might say.  “Lo siento,” I said… I am so sorry…”

I learned that his mother died, his aunt died and his grandmother died in that April 16th earthquake.    My heart all but burst…  But there was more to the story.

The second-story concrete balcony broke, and part of it fell on Luis.  Big nails stuck into his arms, and he was pinned down by the debris and nails.    No details were given, but his father took him to Quito for medical help.

Luis played with Andy and Jesus in front of the cabanas while I had fun photographing their little scrimmage!

Andy (son of Fernando and nephew of Luchy)

Luis was very quick and often prevented the goal.

How can one not adore this young man?

Many hours later I asked to see where the nails injured his arm.  Like a warrior, he lifted his arm and gave me permission to photograph the scars.

When I returned to the cloud forest, that long journey provided ample time to ponder how people in other parts of the world are approaching Christmas and the New Year – in sobering contrast with these beautiful survivors.   One might say, “Poor people,” but on a deeper level, they will emerge stronger and more resilient to future challenges…

By knowing them, I am a better person.

Feliz Navidad to all,