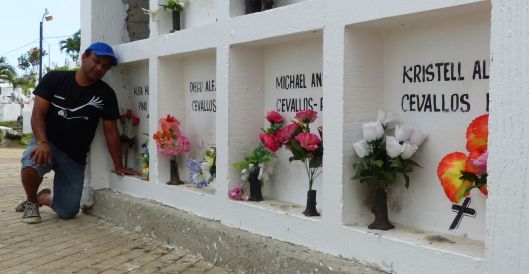 Grief is not a disorder, a disease or a sign of weakness. It is an emotional, physical and spiritual necessity, the price you pay for love. The only cure for grief is to grieve. – Earl Grollman

Jama Ecuador – There was something in his eyes, or perhaps in his voice when Marcos spoke to me on the busy street corner.  He had never asked me for anything except for an exchange of smiles during the many years I’ve known him. I knew little about his personal life; he was the smiling person who helped in his sister’s store, who sold colas and ice cream at the corner, and who made New Year effigies to sell during the final week of each year.

I knew he had lost famiy in the earthquake, but I knew few details.   When he spoke to me in the street, he was worried about his 12-year old son and  mentioned a lack of money for food.  Planning to be out of town for a few days, I promised to return on Saturday.  Over those next few days, I often reflected on his somber tone;  I thought of Phil Colin’s song, Another Day in Paradise.   How difficult it must be for someone like Marcos to ask, ‘Sir, Can you help me?’    I’m glad he found the faith and comfort to approach me.

When I returned on Saturday, finding Marcos was no easy task on the weekend of Ecuador’s Presidential elections; I was determined to follow through with my promise and found him one day after the elections when the mass of people had gone home.    A friend tended the ice-cream box  while Marcos shared the story of losing his wife and three children during the earthquake.   See: The End of the World.

He invited me to go to the cemetery the next morning..

Marcos paused in front of each family member, pointed to each one and said sweet words of respect.  He gave equal respect to the three people in the row above his family.

Irrael was the wheelchair-bound man (pictured below) that I sometimes mentioned in posts about Jama. 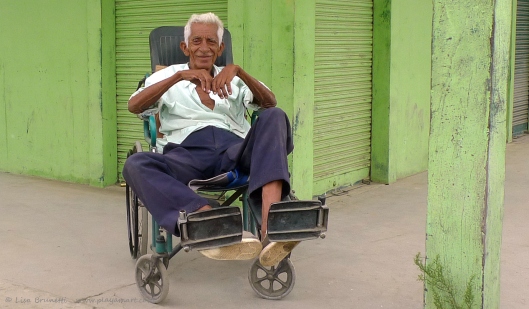 Marcos asked if I would photograph him with his loved ones, a group shot and then one by one as he went down the line…

He asked the caretaker where Chana was buried, and we went there next, sat and talked for a long time…

We next paid respect to his 7-year old nephew who also died in the same house as Marco’s wife and children.    Marcos freshens flowers, wipes soil from the painted surfaces, and when needed, he applies fresh paint.

There were several petite sites with fresh paint.  Marcos called them ‘Angelitos’ and said he does not know who they are, but he found them worthy of attention.  They have no name, no date, but they have their own angel caring for them now.

Throughout our unhurried visit, we sat, talked, and when time to stand, we both hobbled like ancients!   My stiff back reminds me that chikungunya side effects don’t surrender without a fight.   Marcos’  back and leg, injured in the earthquake, protest when he changes position.   Once his leg almost collapsed, but after a few steps he seemed better.

One lone little forgotten angel, now maintained by Marcos with doting affection..  I suspect there are many freshly-painted markers, painted by a kind man out of the goodness of his mending heart.

There are times when Marcos reclaims his smile.  At the end of one day, a friend puffed out his chest and joked, “Hey!  Take my picture!’    Instead of standing solo, he moved to Marcos’ side for a photo with extra meaning.   Friends like that remind us that we’re not alone.

Thank you for allowing me to share Marcos’s story.   Please hold his story close to your heart, and take time to acknowledge those who are not as fortunate as you.   It’s really quite easy to give a quiet ear to one in pain or to drop a bag of quality items to someone who’s in a financial bind.   The the more one practices compassion to others, the easier it becomes.

I will be out of email and cyber contact for the next ten days.   When I return, it would be uplifting to find the world in better health.  I look forward to hearing good stories and seeing positive headlines!

27 thoughts on “Closures at the Cemetery”