decorative ways to conceal cracks in a wall, Timeout for Art, timeout for art now you see it

“Often, we try to repair broken things in such a way as to conceal the repair and make it “good as new.” But the tea masters understood that by repairing the broken bowl with the distinct beauty of radiant gold, they could create an alternative to “good as new” and instead employ a “better than new” aesthetic. They understood that a conspicuous, artful repair actually adds value. Because after mending, the bowl’s unique fault lines were transformed into little rivers of gold that post repair were even more special because the bowl could then resemble nothing but itself.” – Teresita Fernandez

Panama City-PANAMA –   Like a stepchild that it is not, an impromptu project at Barb’s condo in Panama has been waiting in the queue of stories to share.   After receiving another two-year nonresident visa to work in the arts, I was free to leave Ecuador without a lot of red tape to return.    I first visited Costa Rica for a week, took care of personal business, visited with friends, and then on the return trip to Ecuador, bailed out in Panama to spend a week with Barbara.

Barbara is my amazing and tireless friend who is selfless when it comes to helping others.  Here are images from some of her past visits, starting with when she helped create the Magic Carpet at Casa Loca. 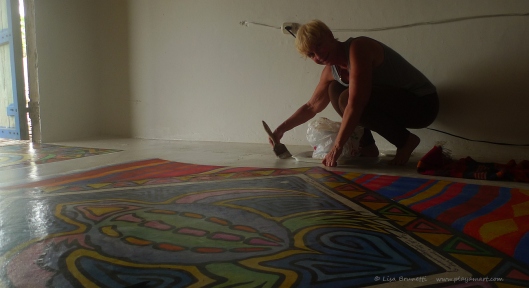 This is surely the most lovingly-painted bodega door in the country!

Recycled cans!  Why is Barb chuckling as she sits on the bench? 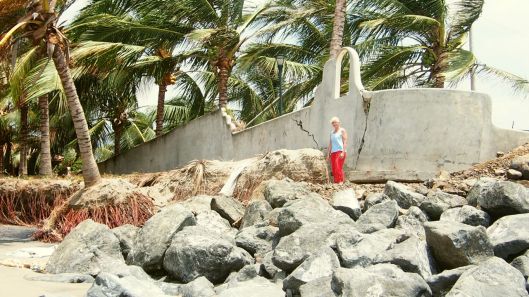 When the ocean advanced, Barb witnessed the changes.

Barb and I enjoyed a 30-minute detour* through the “Women’s Art Exhibit” in Museo Bahia de Caraquez. – *before the earthquake…

Thanks to Efrain’s visit to the property, Barb was officially infected with the birding bug! 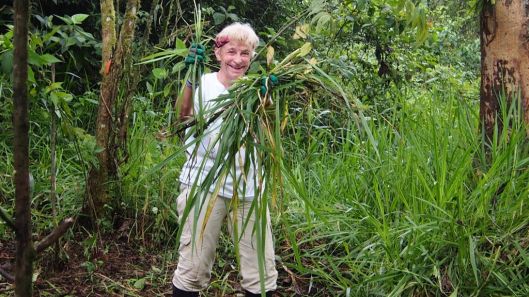 Barbara has helped me with SO MANY projects, and even if it were just a week, it was time to spend time with her.   “I’ll be bringing my paint brushes,” I stated, “so be thinking of a project.”

She had no project, but I spotted a subtle cosmetic crack on a wall.  That wall happened to be very near a column that I’d painted years ago.

“Would you like for me to make that crack disappear?”

After a search-and-find mission for acrylic paints, I mixed basic colors to match the ones on the column.  Sorry I don’t have photos of the first project, and I forgot to photograph the subtle crack before the paints were applied.

Look carefully below, and you’ll see one subtle crack!

Great reference material thrived right outside the condo…  I took a few photos and also picked a few leaves.  As I painted, the background music was televised news about Hurricane Irma and her trail of destruction. I also painted while Barb hosted a bible-study group from her church!   Memories are often recorded in those subtle applications of paint.

The bamboo ties in with the column, which was painted when Barb first moved into her condo.

I stayed busy and focused – and at times reminded myself, ‘Where’s the crack?”  Ha!

The image stretches as high as my arm would reach.  There was too much ‘easy space’ to use without risking an accident from standing on a chair or stool!  Next trip/visit will be ladder time! 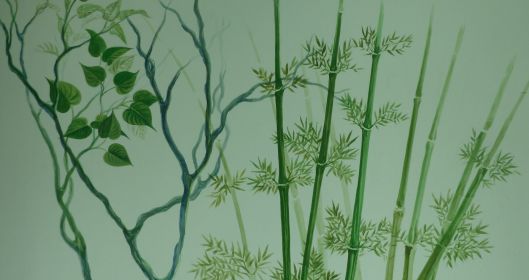 I worked until time to leave for the airport, so the new garden area is now hibernating until my next visit.

I look forward to returning and putting a little acrylic fertilizer on the garden! Who knows what’s patiently incubating and waiting for the next period of growth?!!