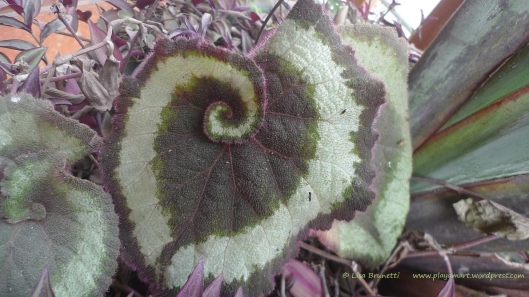 Nicolas critiques the energy of the swirl… 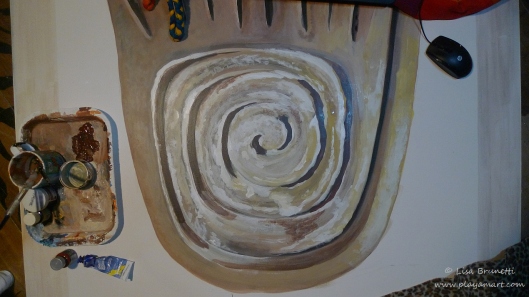 Inspired by an artifact in Casa del Alabado/Quito Ecuador 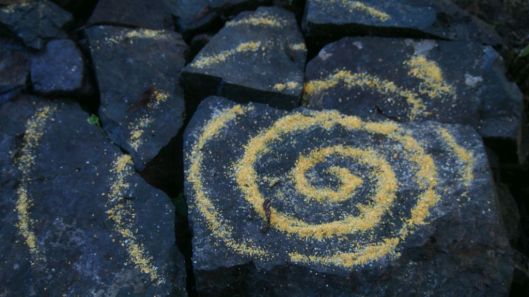 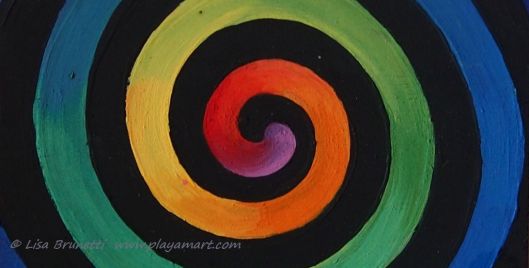 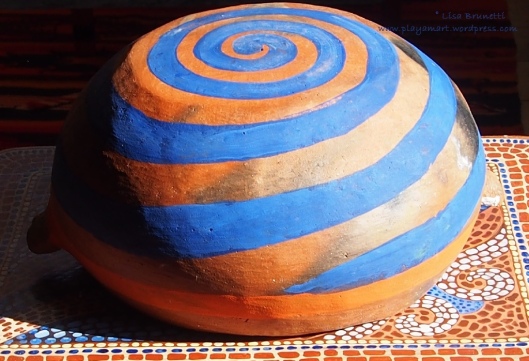 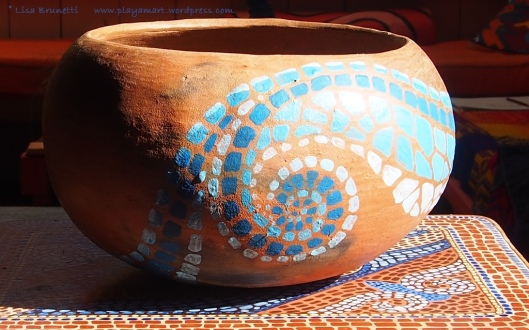 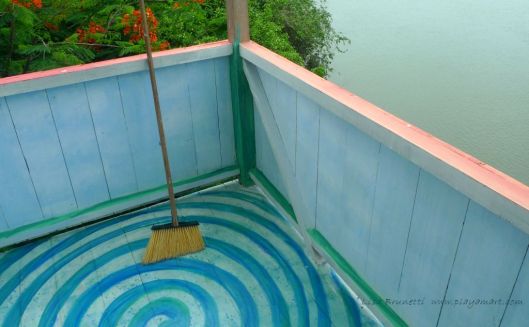 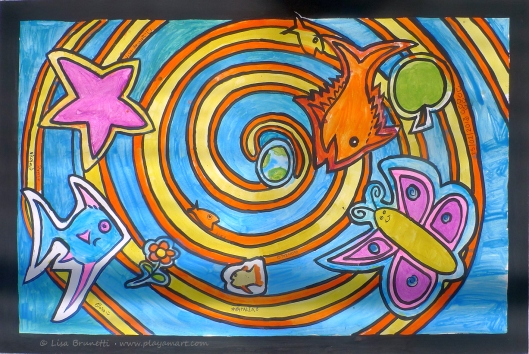 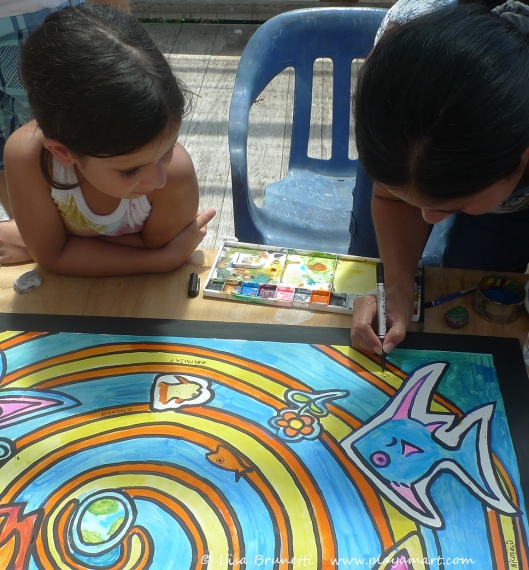 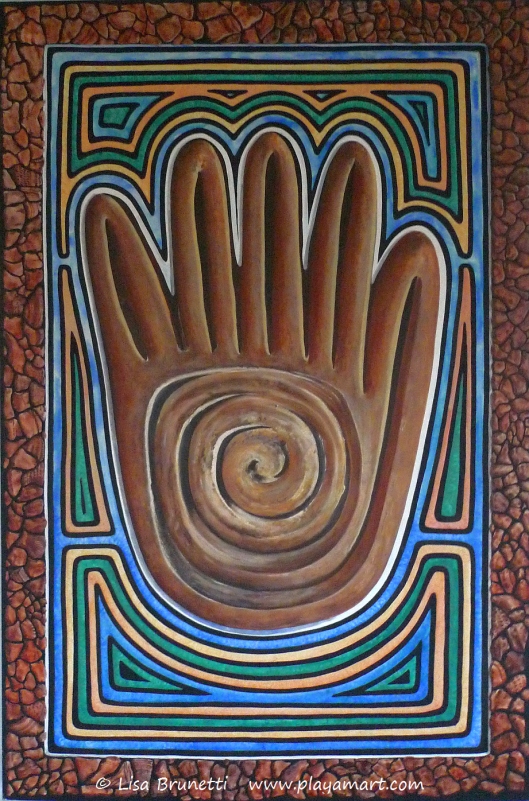 “We are not going in circles, we are going upwards. The path is a spiral; we have already climbed many steps.” -Hermann Hesse

The spiral design is one we’ve all drawn or doodled at one time or another.  When I share with others the joy of drawing, we often start with drawing ‘tornadoes’ – a repetitive round and round and round type motion that helps us adjust to the pencil as well as slowing down our thoughts in an almost-hypnotic approach.   After going around and round countless times, it’s almost effortless to then – with the same light touch –  draw an ellipse.

Many times I find myself drawing spirals in that same easy-going style; not thinking of anything, I draw those flowing lines that spiral from outside to in – or inside to out. It’s like a form of meditation – no thought involved, just relaxed and soothing lines, a bit like watching a ballet or tapping into the natural flow of music.  Sometimes a second set of lines wraps inside the other.  There are times when my mood or life is less relaxed, and the fluid movements are replaced by geometric grids and cross hatching, as if my internal computer is analyzing every pixel while searching for the ones that need attention!   I’ve always enjoyed the maths and the challenge of drawing complicated spirals – a bit like patting your head while rubbing your stomach! The blue/green and black spirals in the painting below illustrate ‘designs within designs.’  They appear simple and can be semi easy to paint but are much more difficult to draw! 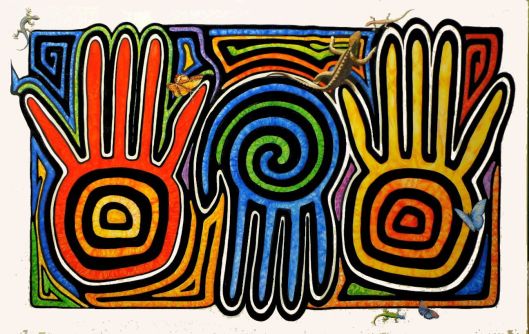 My friend Barb ‘caught’ me once while focusing on the design of the lines.  With one finger I follow the direction of one color while following the other color with my other hand.

Sometimes those concentric lines are confusing – even to Lisa! 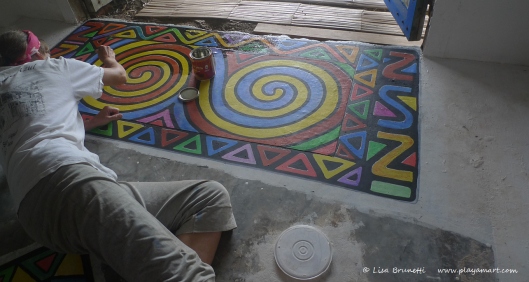 Spirals have been with us since man first scrawled on rocks, pottery and cave walls, and probably more often in the sand and soil!  Over the centuries we stumble upon remaining relics and marvel with wonder.   Who drew that design?  Was it drawn with a light and happy heart, or with intense concentration?  Did others help, or was it a one-man/woman creation?  Do the designs tell a story of celestial events or were they intended to represent infinity or....

They were surely used as symbols at times, but I think that many times they were scrawled in the same way that they are often born from my own psyche.  Pick up a pencil or pen and draw a spiral – it’s easy!  Take a stick and draw a spiral in the sand; easy!  They just happen!  No pre-planning is involved – with pencil or crayon, a spiral is a very comforting design drawn with almost-effortless motion.  Our brains naturally grasp the form of timeless spirals, and replication of those designs gives us pleasure. The provide a way to get in touch with what’s brewing in the center of our souls…

“Contact with the sacred occurs in the stillness of the heart and mind. If there is any real destination to the spiritual quest, it is this point of silence, the middle of the spiral, the center of the self. … The only map that does the spiritual traveler any good is one that leads to the center.” – Christina Baldwin

Several times over the past few months, I recalled a dream from long ago.  A spiraling whirlpool was in the dream – a true whirlpool, and a friend and I were caught in the vortex.    He, a very talented artist, was on one side of the whirlpool and I was on the other.   We were kicking /swimming hard – trying to swim away from the vortex that was sucking us both toward what appeared would be our deaths.   Like in a cartoon,  I suddenly received the ‘eureka’ moment, turned and swam away from the whirlpool, reached the edge of a swimming pool, climbed out, walked to a breaker box and threw the breaker!   The whirlpool stopped instantly, and I walked away.

My friend, the high-strung artist, sometimes continues to kick against the current.  When he sends me images of his work, I can easily tell by the colors if the current is about to consume him, or if he’s thrown the breaker!  I also have other methods to dodge those challenging moments – besides ‘throwing the breaker.’   I shared that story here: Inspiration: When the World outside my Window goes Insane.

Those challenges help us to become stronger people, though at the time we can feel isolated or distanced – but later we look back and realize the positive lessons we learned. 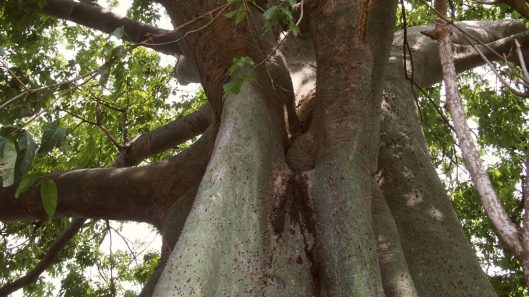 If you’re kicking against the current, it’s sometimes hard to find your way out of that negative vortex.  Stress is very bad for one’s health; drop the ego, let go of negative issues from the past and focus on what’s positive.  Throw the breaker! 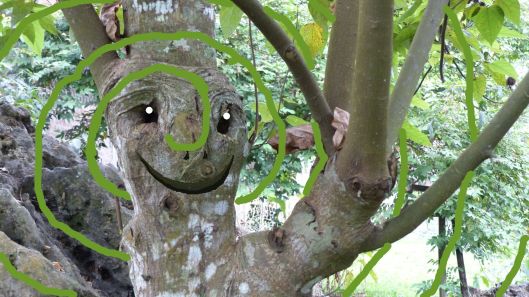 (This is another post written offline and will hopefully be published later in the week.   Thank you for such kind and positive response to my recent posts;  I’m still ‘in transit’ while trying to corral my personal items and transport them to my new home – hence the thoughts about my dream and spirals and throwing the breaker!  Love, Z)

17 thoughts on “About those Spirals…”