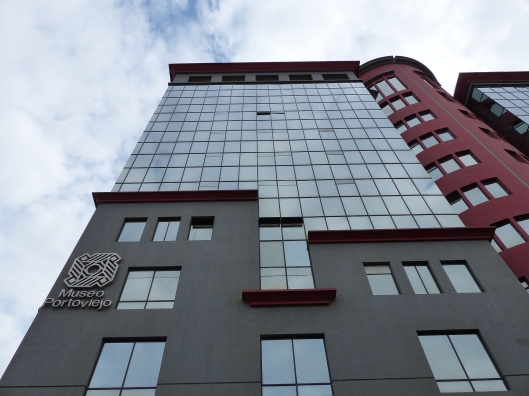 Thank you everyone for your concern, and for your support.  For those who missed the last few posts, I’ve been in a holding pattern in Guayaquil.   I stayed one extra day after friends left Ecuador, and in that day I received that glorious ‘cedula’ which will help get internet in the apartment, an Ecuadorian driver’s license, and other benefits.  Yay!

I checked out of the hotel and went to the nearby bus terminal – only to find it basically abandoned. It was a ghost of the normal bustling Terminal Terrestre with the straightest tangents to all destinations in the country.

As many of you already know, the thought of renting a burro to reach home was an option I considered.   A burro could endure the journey far better than a horse, and I smiled at the thought of strapping my Andean bag to the burro’s saddle and aiming for Portoviejo!   Perhaps, when this present smoke clears, I will research the possibilities of taking that trail ride.   Does anyone want to join me?!

Margo, thank you so much for adding your comment via your Vilcabamba experience.  Glad to know that you received some rain, and I noted a headline from a few days ago to expect more-than-usual rain for the rest of this year.   It’s dry here in Manabi, and most likely all of the farmers would be grateful for the rain.

Although people in Guayaquil assured me that travel on Saturday (yesterday) would be fine, the owners of Manta Express said that they could reach Manta but not Portoviejo.    Usually the shuttle stops at the community of La Pila and connects with their Portoviejo shuttle.    A couple reached my hotel after traveling from Puerto Lopez, and I asked, “How did you get here?”

They smiled and said that they paid a driver 120 dollars — and the man added, ‘and the driver removed his car tag which showed he was a taxi driver.’      Hmmm, I was not too crazy about paying someone a lot of money to make that last three hours home, and the burro sounded like a sound option at that time!   With a positive attitude, I bought the Manta Express ticket, which soared overnight from ten dollars (at least ten years at that price) to fifteen.*      I reminded them that I hoped to reach Portoviejo and not Manta.   The driver thought it would not be possible, but we would check in La Pila before making the last half hour of the drive.

The following slideshow contains screenshots from the evening news on Thurs and Friday nights:

After a rest stop (Corviche para me!) the shuttle bus continued until La Pila, and I asked to stop there.  If I could not find a driver or co-op vehicle, I would see about renting that burro.  Of course my travelmates chuckled at the idea of the gringita traveling by burro.   The couple in the front of the van said that they were going to Portoviejo, and someone from the family would be arriving soon.   They gave me a ride and insisted on driving me to the apartment – because the taxistas were still protesting.

From an empty ‘Terminal Terrestre’ in Guayaquil, to television images of extreme unrest and looting, to a tranquil stop in La Pila, I have witnessed only the good side to human nature.   “Lisa, are you alright” emails patiently awaited, and I am glad to be back in Manabi, where I have a good supply of food, paint and paper and good books (The Overstory was amazing!!!! ) to keep me occupied until the problems are resolved.

Guayaquil’s Terminal Terrestre, near the international airport. It was actually nice to wander this area!

Uh-oh, Houston. I think I landed on the wrong planet. Where are the buses?!!! (Last Thursday afternoon) 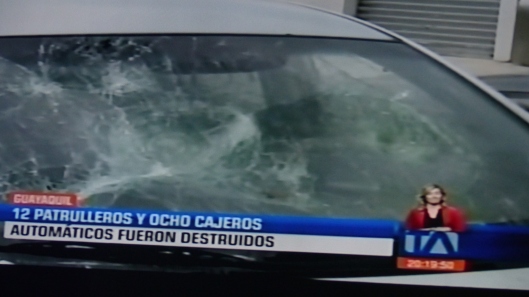 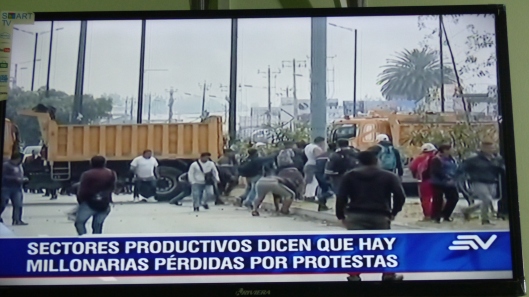 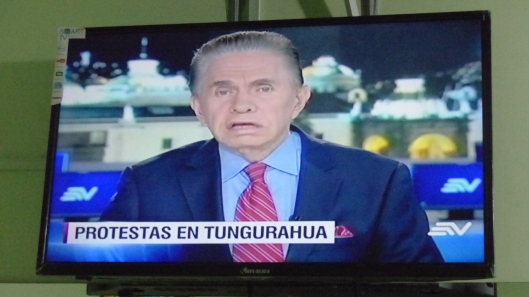 This morning in Portoviejo I walked to the market for produce, tuna, quinoa, etc.   Traffic choked the area, as did the pedestrian traffic.   The locals are also preparing for tomorrow, when ‘they’ say the protests will resume.

It was more like Christmas Eve instead of a lazy Sunday morning.    Returning my items to the apartment, I then walked to the museo to let everyone know that I reached home base.     Three  serious-looking police on motorcycles rolled slowly in the opposite direction.   Unlike the market, the streets near the museum were almost empty.  Few cars traveled this area.   At the corner of the park by the museum, an armored Police vehicle blocked the street.  A barricade stood at the other end near the museo’s entrance.

Museum guards/staff on a normal day!

The museum was/is basically empty, except for the guards that rotate 24-hour duties.    I asked if I could use the internet in the library (Of course) and the most-recent emails were from people who live here and wanted to be sure I was OK.    I am blessed to have a team of living angels who watch over me.

While answering emails and assuring loved ones that all is OK, one of the guards came downstairs and stated, “Lisita.   Eat.   Encebollado”  and he placed a bowl of encebollado and a serving of chifles on the nearby table.      I reached a stopping point and took my ‘take out’ meal upstairs and dined with the guards.   So sweet and loving people, and for sure if things should turn violent, I would race to the museo in search of safety! 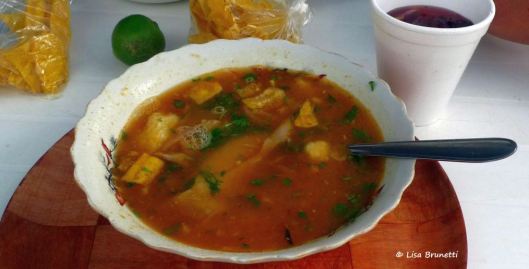 from archives: Encebollado and chifles.

Suffice to know that if I should go silent again, all is fine and I will be tucked under the wings of people who embrace foreigners into their loving care.