Portoviejo, Ecuador – Artists often notice subtle details, sometimes after a few seconds or minutes or hours or even days later, but the observant mind sometimes hits the pause button and asserts its voice: ‘Something’s not quite right here.’
That happened long ago in Nicaragua, after seeing a particular ‘street bum’ each time I visited a certain town. Not allowing that ‘Something’s not quite right here’ moment to pass, I slightly altered my schedule and am so glad that I did. The experience humbled me.  That post is here:  “Why Not?” 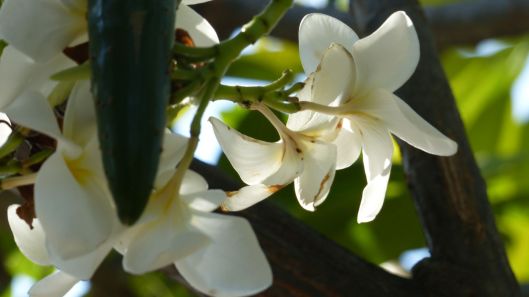 Two weeks ago here in Portoviejo Ecuador, I hoped to get permission to check on the Soras in the nearby Parque Las Vegas. In the past – before ‘Coronavirus’ became the new vocabulary word for each day – the guards sometimes asked about the birds that captured my interest. They knew about the not-often-seen (in this Province) Soras on winter vacation at the Park.

With little traffic downtown, and only a few pedestrians in sight, I set out for Parque Las Vegas – perhaps five minutes if I walked fast, and ten if I took the scenic route by a smaller park. With camera and shopping bag, I took my typical route – to admire the always-blooming white Plumeria trees, then a few steps more to “Iguana Corner” where a dozen or so iguanas bask in sun and shadow, on the ground, high in the limbs and sometimes on the sidewalks. Soras were on my mind – and permission to look for them – so I hurried the short distance to the much-larger park.

Fifty or so yards back and beneath the canopy of a closed ice-cream shop, the guards perused their phone screens.
“Hola?” I called “Hola?’
I think they forgot why they were there, or where they were, but they reconciled themselves to guard status and greeted me. I explained that those three little birds we’d been seeing since January should be preparing to return to the northern hemisphere. I asked if I could go to the nearby ‘segua’ and see if they were still there.
“Si,” they said, then returned to their screen-watching tasks. 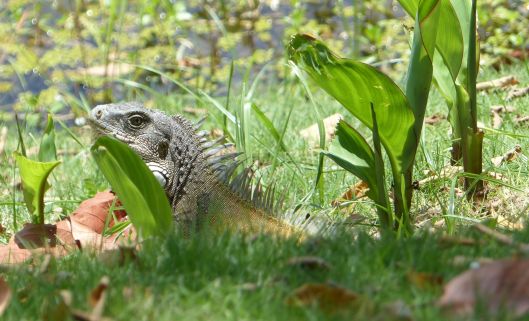 Approaching the smallest area of the little marsh, I first noted one nice large iguana and took a few photos. Just beyond the iguana, however, was a Sora! For the next ten minutes I watched and photographed it, then moved to the second area and spotted one more Sora. Yay!

Not wanting to overstay, I walked back to the guards, gave them a thumbs up, then returned home. The photo session with the first bird turned out well, as I’m always hoping for ‘better’ reference images for my art. It wasn’t until later that I thought about the iguanas and worried, “They are hungry.”

A few days later I returned, and the guard at the smaller park confirmed. The local restaurants usually contributed fruit and vegetable scraps each morning, but now most all restaurants are closed. No one was feeding the iguanas, but the guard pointed out: ‘they have leaves on the trees.’ The Royal Poinciana/Flamboyant, at this time of year normally loaded with leaves and flowers, was all but stripped clean. I asked a few people to pass the word, and mentioned this in the last post – and hoped that more people would remember the iguanas.

That first ‘batch’ of broccoli, cauliflower and beets provided great photo ops after the guard spread the feast on the ground. Within a minute the first iguana appeared, then another and another. Every two or so minutes, more iguanas scooted down the tree trunks or approached from other tangents on the ground. Every so often there was a brief food fight, but basically they ate in harmony. I realized that they have trouble eating large chunks of food, so I made a ‘Note to Self” to cut their food into bite-sized pieces! 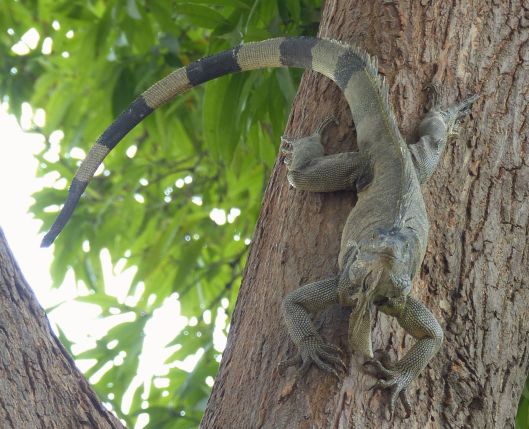 Four days later I returned with a second batch. With great relief I saw a great feast of lettuce, cabbage and cucumber scraps on the iguanas’ dining area. Several iguanas chomped on the leaves, but most were most likely full and in the upper canopy snoozing zone. With a huge smile, I gave the guard the bowl of scraps (cut into smaller chunks for the iguanas) and watched as he put it in a second area. Almost instantly one big iguana zipped down the mango tree and headed to the scraps. A second and third arrived; could they see the colors or did they smell the fruit? They especially loved the papaya!

Today I took a broccoil-beet-papaya assortment and was glad to see that another person had brought their small bag of scraps. The iguanas are not receiving a consistent supply of food, but the human neighbors are remembering them.

Got Papaya? If so, maybe you can share with a nearby park.

The curfew here starts at 2, and they are strict!  Time to scram!  Sorry, no time for proofing so all mistakes are mine!   Stay well everyone and be creative!   Lisa