(Detail/Burrowing Owl/watercolor/gouache by L. Brunetti) The Burrowing Owl design graces a Defensor de la Naturaleza tshirt shared with friends this past week. Several days after I began work on the design, the ABA named the Burrowing Owl as the 2022 Bird of the Year.  The bird continues to pop up as if to say, ‘Yeah, I know I’m special!’ 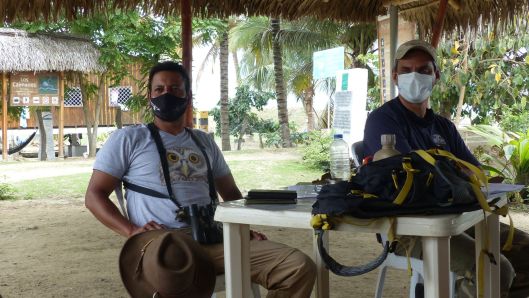 Manabi Province/Ecuador –   December 2021 was filled with birding moments.  From visitors to the exposition to art classes to the first Christmas Bird Count (Dec 25, 26, 27) for the Chone/Segua area, to random bird moments in various locations, there’s a lot to share.  You’ll understand why I’ve been so quiet…

Sr. Ludovico, may we have some quiet music to start this new year? 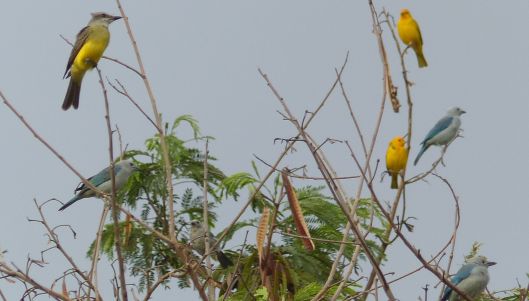 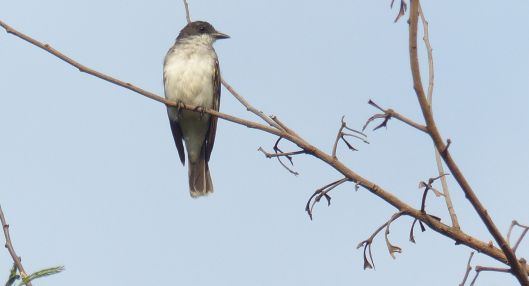 The rare migrant to this side of the country returned – one of about a dozen Eastern Kingbirds. Welcome back, Rey!

Scrubbier than the mockingbirds I remember from the Deep South USA, the Long-tailed Mockingbird has a song just as sweet.

Locals call this ‘Tierra Espina’ – and the birds gorge on its fruits! https://www.inaturalist.org/taxa/166920-Pithecellobium-dulce

I mis-identified this as a Common Pauraque, but eBird moderator Daniel Arias politely informed me it’s the not-often photographed Scrub Nightjar, found only in Ecuador and Peru. Carrrrramba!

The quiet and handsome Striated Heron.

Helping out at Museo Portoviejo in November and December, these tourism students from Manta agreed to pick up trash along Rio Portoviejo. 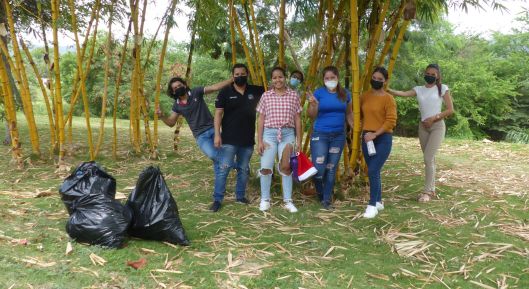 What a way to spend their last day at the museo, and we will always look at tiny mint wrappers and plastic cups with a bit more scorn! 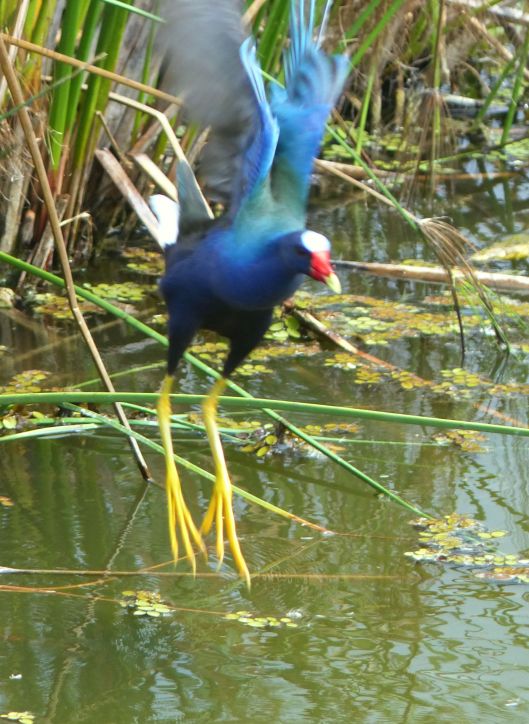 A mystery bird appeared in mid December and continues to mystify this observer.  Drab in color, is it an immature Yellow Warbler?

Several trips to Poza Honda provided heart-warming observations of many species celebrating the arrival of the rainy season. 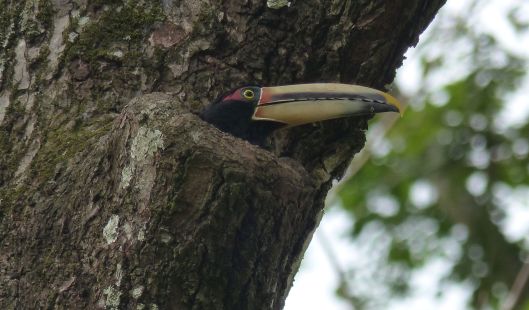 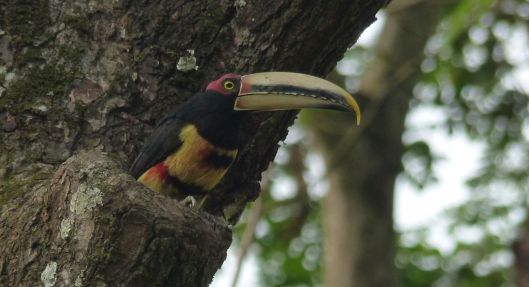 “Teamwork” — One flies in, the other flies out! 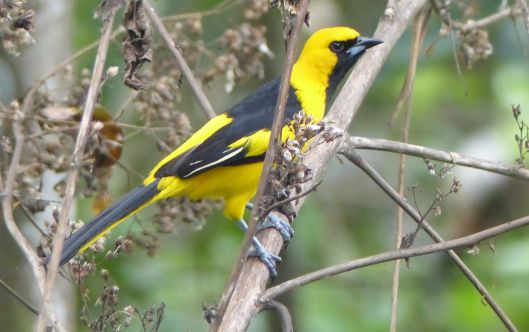 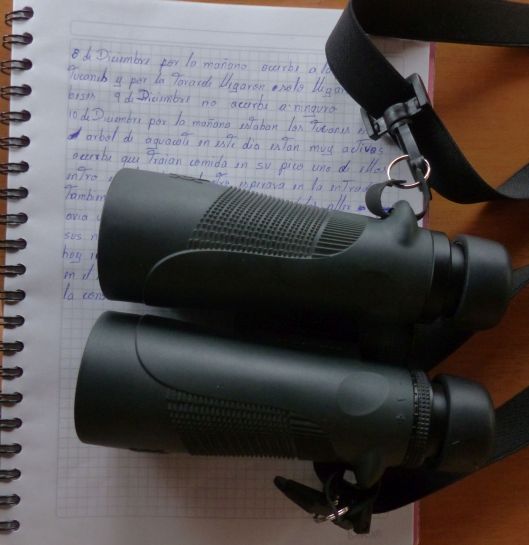 Using borrowed binoculars (Thanks ‘Don Jorge’/Jurg) Melissa Sanchez has been documenting the Oropendolas’ nesting, as well as the Aracaris. She writes me at night and shares when there has been entertaining activity. I am so proud of her!

(From a Global Big Day 2019 – Melissa shows Peter part of the Poza Honda trails while Jorge/Jurg waits for us to catch up.

She was so excited one evening, that I thought, ‘OK.  I’ll go there tomorrow,’ and she was shocked to see me arrive!   A drizzly day made for difficult photo ops, but the Chestnut-Headed Oropendolas seem to claim this area as theirs – though they are out of their normal range.

The museum art students produced some great work this month – not bad for beginners: 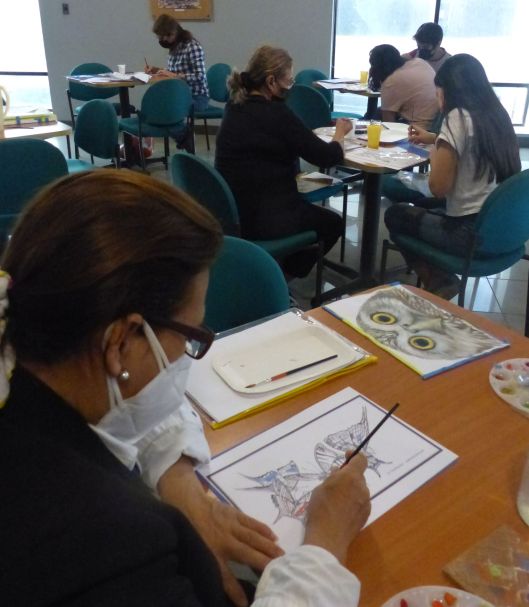 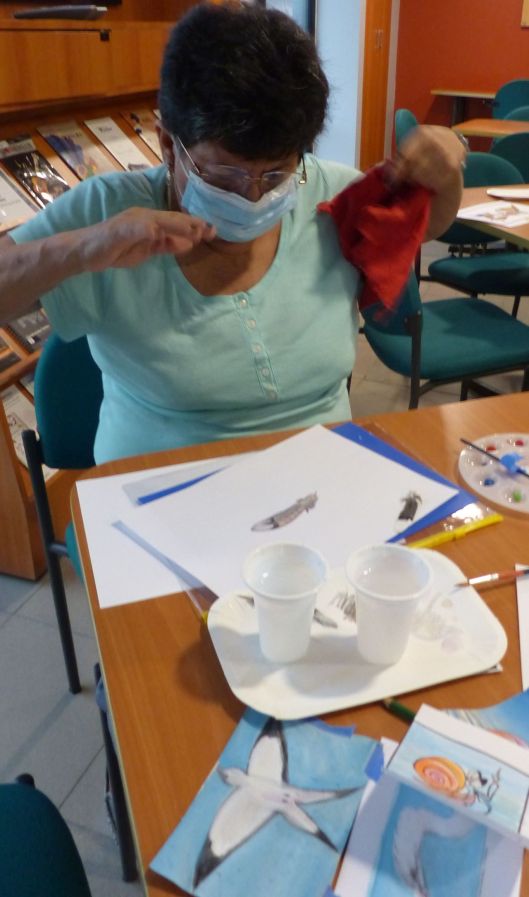 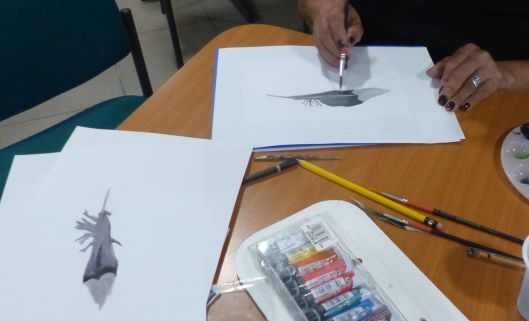 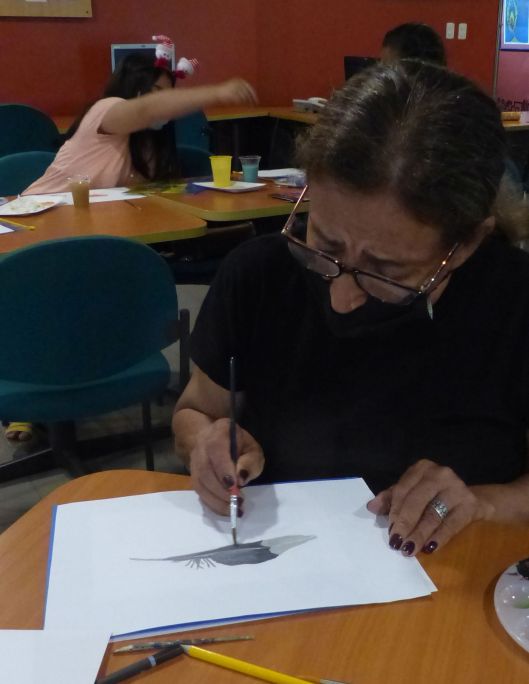 One day – when the museum was ultra quiet at the end of the day,  I was the benefactor of a Christmas serenade that drifted up from the floor below.  Starting with Cohen’s Alleluia, Katy practiced with Carlos Wellington for an upcoming series of Christmas concerts in the province.   After about the third song, I put down my work and quietly descended the stairs, tip toed into the auditorium, and wordlessly thanked them by placing a quarter on the chair beside them.  They burst out laughing.

I wish that Katy’s version could go here, but this precious young lady provides a lovely alternative:

I will forever cherish the beauty of that private concert.

A visitor to the exposition witnesses the magic of augmented reality.

Now we tweak our setting to an area not often mentioned;  San Antonio/Chone and its first Christmas Bird Count. 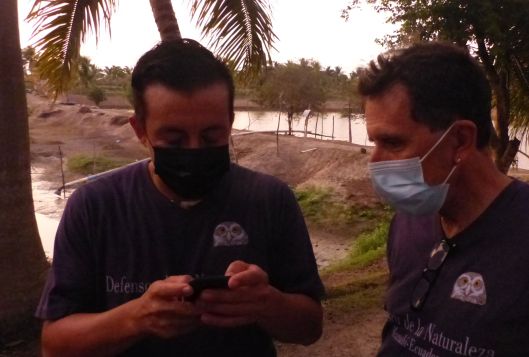 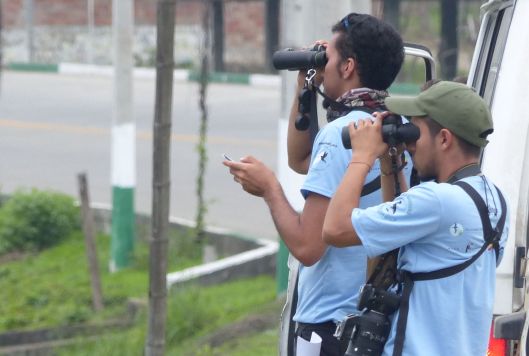 At 7 in the morning, my teammates and I were admiring the water birds in a small pond along a busy highway.  We would turn ‘left’ just past the pond.

The road less traveled offered a slower pace for the day:

Greater Yellowlegs allowed a brief viewing, as did White-cheeked Pintails and Blue-winged teal…

We ambled along to the next hill and were captivated by a family of Burrowing Owls. 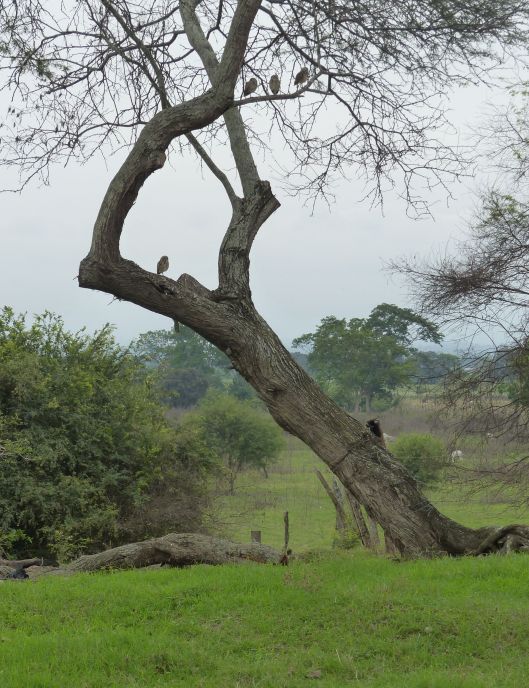 Tipping along that same rural highway, we seemed to have found a jackpot of the ABA’s mascot for 2022!

Five or six more Burrowing Owls, most of them young ones, entertained us for another ten or so minutes.

Down even less-traveled roads we found Peruvian Meadowlarks in a field of corn stubble while we took a watermelon break.  (Thanks Jorge/Jurg!)

My three birding companions Jurg, Giovanni and Eduardo appreciated the striking beauty of the Peruvian Meadowlark, a ‘life bird’ for all three! 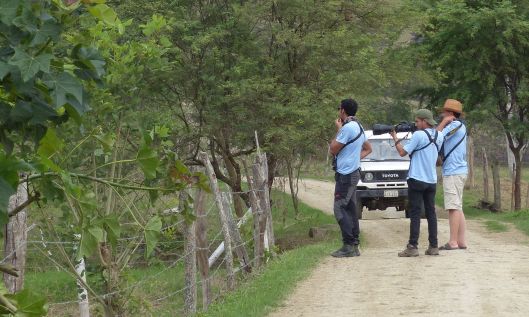 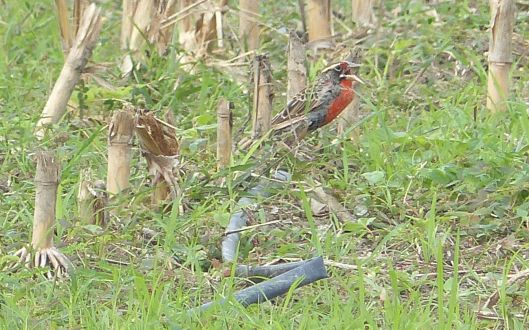 Perched in a calabash tree was a White-tailed Kite. 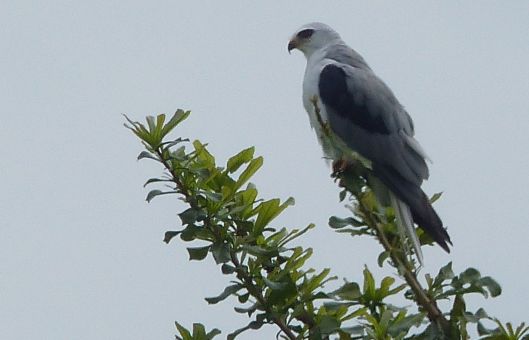 Asking for directions often results in special memories. A man on a motorcycle escorted us to a private entrance to rolling pastures that flanked a large wetland.

We spent the remainder of our time roaming the pastures and crawling through a maze of tight-stretched barbed-wire fences.  A White-throated crake buzzed its alarm only a few feet from where I walked, yet it remained hidden in the thick grasses.   Two Ospreys scouted from above.  Limpkins shrieked and Black-bellied Whistling Ducks moved between areas of thick cattails while we struggled to count the ever-changing cast of gallinules, jacanas and grebes.

My camera battery stated, ‘Enough!’ and refused to take another image.  Our own personal batteries were quite weary as well!   After nine hours of birding, we happily returned to the headquarters and swapped stories with the rest of the group.  There is surely a group photo floating around social media, but here’s one partial view:

The next day blended a sunrise canoe trip with serious data compilation after breakfast. 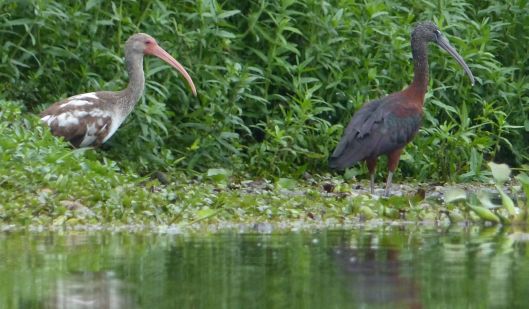 A mid afternoon surprise finale prompted us to ‘Come see the Common Potoo!’Across the highway, through a barbed-wire gate, down a path, through a shaded garden, and — I asked Luis and Juan Carlos to imitate the pose of a Common Potoo: 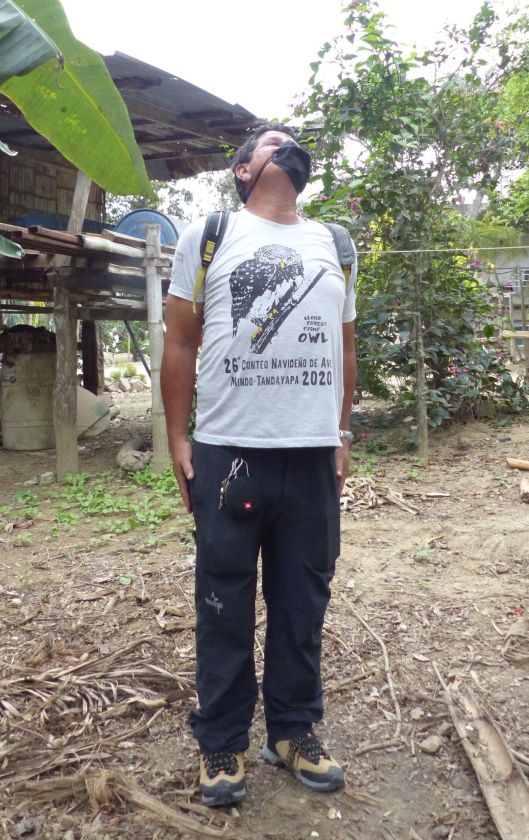 After hours of compiling data, we enjoyed the chuckle.

One more surprise awaited me – an orphaned Howler Monkey:

Isabella Arteaga and the orphaned monkey – along Rio Chone.

Recalling my years with Howler Monkeys as my closest neighbors, I replicated the sounds they taught me years ago.   Perhaps this little one was homesick for its native language – we weren’t expecting it to have such a dramatic reaction:

Back in Portoviejo, basking in great birding memories, I was blessed with one more  end-of-year encounter with the Burrowing Owl:

The Blue-gray Tanagers were not as pleased to see it as I was!

“Verdad” – it’s been a month full of birding memories, which justifies a Feliz AVE Nuevo start to 2022.

Sending love to all of you,