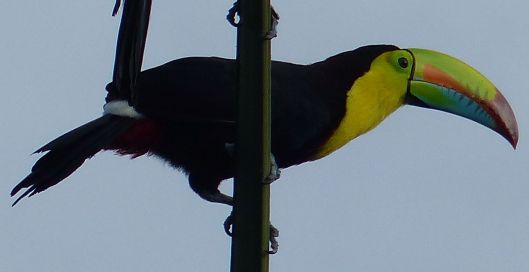 A very contented Toucan in Panama…

A deer in my friends’ yard in Costa Rica… 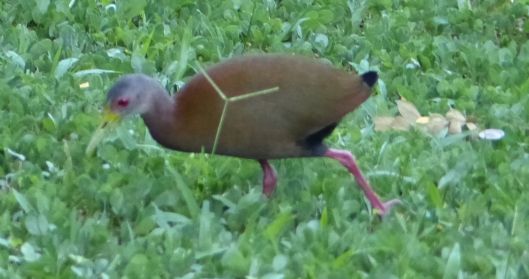 A very-rare Brown Wood Rail in the yard at the Poza Honda Ecuador house!

From Dictionary.com : Amble “verb (used without object), ambled, ambling.
1.    to go at a slow, easy pace; stroll; saunter:
He ambled around the town.

2.   (of a horse) to go at a slow pace with the legs moving in lateral pairs and usually having a four-beat rhythm.
noun
3.an ambling gait.
4.a slow, easy walk or gentle pace.
5.a stroll. 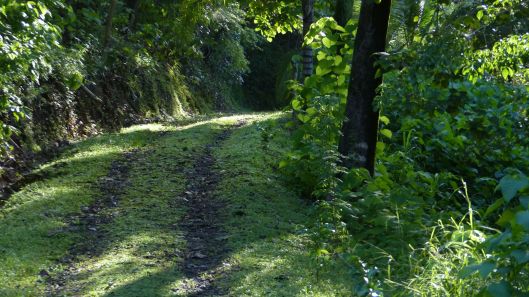 Ambling along a shady road with Marie in Costa Rica….

“We ought to take outdoor walks, to refresh and raise our spirits by deep breathing in the open air.” — Seneca 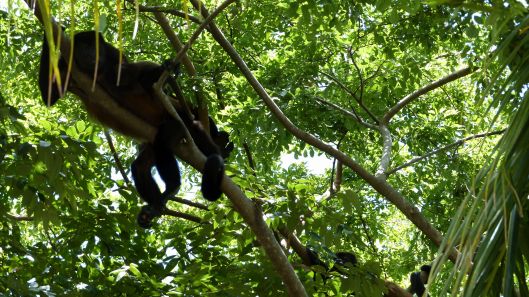 Don’t forget to look up when walking! – Costa Rica

In the past three weeks I’ve been from Ecuador to Costa Rica and back via a stopover in Panama to visit my friend Barb.   These were quick-but-very rewarding  visits that combined ‘business’ with pleasure.  Comparing the three countries, I definitely give Costa Rica and Panama the top scores for quality of internet!

Greetings to all on this USA day of Thanksgiving.    In strong contrast to those affected by world-wide unstable weather, I spent the early morning helping with finishing touches on a mural-painting “minga” near Mindo’s central park.   Students, teachers and artists worked in easy harmony over the past few days while all-but perfect sunny skies smiled upon us. 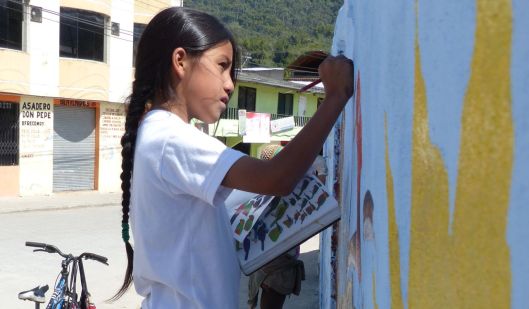 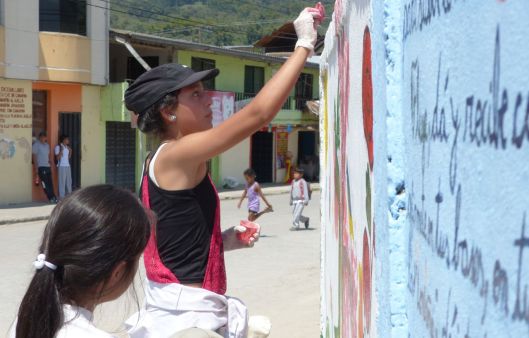 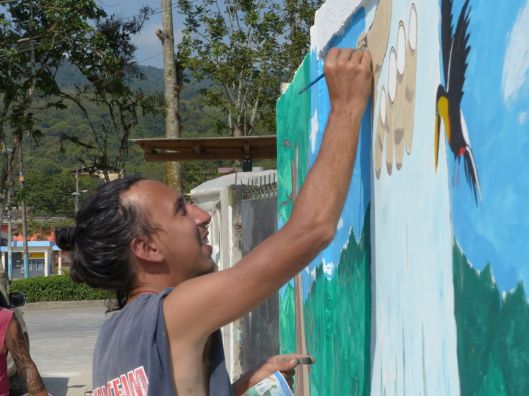 Although the experience filled me with gratitude for these lovely people who embrace foreigners into their culture, my thoughts have also been tweaked to equally-loving people in Central America who are and will be affected by Otto’s late-November visit to the area. END_OF_DOCUMENT_TOKEN_TO_BE_REPLACED

Thinking of all of you that are affected by Otto’s late-November surprise.

When I scan maps of Central America, I always spot that large Lake Nicaragua- Cocibolca (Ometepe is home to Debbie and Ron, who – ironically- were in New Zealand and experienced the recent 7.8 earthquake…)  Then I look due south to find the Nicoya Penisula where many of my friends live…. and now due east to Barra Colorado on the north-east border with Nicaragua, where my friend Dan has Rio Colorado Lodge.   Hang in there everyone…  Many will be watching from afar.

Kris out of Panama posted an update on weather in the David area. ‘Otto is Soaking Us”

(To anyone with internet there, updates are appreciated…)

Lessons to all:  Keep your homes well stocked – disasters seem to be surprising people world wide…. 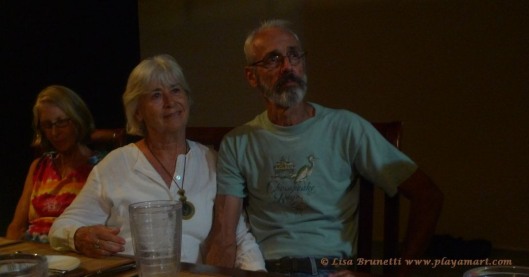 Hank and Marie, a dear couple that I nicknamed ‘The Swans.”

A talent is not a talent until it has been shared. If we are so blessed as to be an artist, shouldn’t we help someone just as someone helped us? (Wayne A. Wright)

Who wouldn’t want to step into this sunset dining scene?

Years ago when Hank and Marie Groff were distant neighbors in Costa Rica, Marie often invited me to join them for dinner.   If I was working on a creative project, I knew that I would have difficulty pulling out of my focus to switch gears, put away my supplies and drive to their home for dinner.    Hours later while deep in a painting trance, I often heard Marie return.  She quietly came inside, whispered from the doorway, “Don’t stop;  your dinner’s here in the kitchen.”    With a loving heart, she retreated without another word.

We embraced a new challenge – the art of mosaic tile!

When my vehicle was no longer road worthy, she always asked if I wanted to ride with her to a larger city to buy supplies.  When the other option was by bus on bumpy four-wheel-drive roads, I was always grateful to ride in her Isuzu Trooper limousine!

Hank and Marie help with a tear-down project – Team Zeebra!

(Above photo:  see Construction in Reverse.)

With a background in construction, Hank as been a patient teacher;  he’s tutored me about soil samples, engineering reports, concrete finishing and repair.  He’s helped solve water-line riddles, and every so often I am able to share my work experience with him.  He has explained why the peeling paint on a wall most likely came from a roof leak and has helped with repair on gates and shovels and doors! 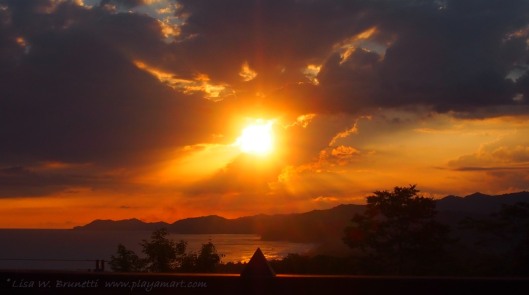 From the outdoor pavilion – June Solstice Sunset – One Day Early!

They are tireless in their support, and I am blessed to have such loving and helpful friends.  It’s quite natural to reciprocate with the same loving spirit!

Their ‘soaking pool’ perches on the corner of their outdoor pavilion, and Hank recently tiled the inner area.     The three of us agreed that a mosaic border would enhance the effect, and we approached the challenge at full throttle and worked from mid morning until sunset almost every day until we finished! END_OF_DOCUMENT_TOKEN_TO_BE_REPLACED

The Daily Prompt rolled through, and while tapping into a fast internet signal, I am pleased to share this post that illustrates contemplation.

Raul, of Hostal Cruzita, takes time out to mentor a future chess master!

I remain impressed that many Ecuadorians practice the art of contemplation through the game of chess, and they take time to mentor the younger generation.

The children of Playa San Miguel Costa Rica often contemplate the mysteries of their marine ecosystem.  I will always treasure the memories of the day an olive ridley sea turtle came ashore in the daytime to lay her eggs.

Hopefully these children will grow up and help fight for nature’s rights.

* Thanks to those who are actively helping (via easy pain-free voting!) the turtles catch up with the frogs; the frogs and turtles are swimming, crawling and leaping towards a $20,000 prize!  Some out-of-the USA people hit a stumbling block with the zip code requirement.  One found a way around the problem by using her sister’s USA zip code.   “Save the Frogs” remains in first place, but let’s help those endangered turtles come from behind and win in the final stretch!

Thanks for spreading the word!  Z

This one almost got me!

Playa San Miguel Costa Rica —  Every so often Mother Ocean flexes her muscles and reminds us of how small we really are!  These high tides barreled up the beach, through the palms and scattered this group of wave watchers! END_OF_DOCUMENT_TOKEN_TO_BE_REPLACED

(Detail of an oversized bookmark for a friend who left for an extended visit to the UK.)

“Nature will bear the closest inspection.  She invites us to lay our eye level with her smallest leaf, and take an insect view of its plain.”  – Henry David Thoreau

One of September’s Timeout for Art posts (Find the Pot of Gold) tapped into the above quote, and hopefully many of you were able to “slow down and inspect what’s lurking nearby.”

This past week presented many opportunities to take an insect’s view of nature, and I never regret time spent at eye level and absorbing those details. END_OF_DOCUMENT_TOKEN_TO_BE_REPLACED

This week’s WordPress Photo Challenge showed an image of rebar – called ‘varillas’ in Latin America, and it reminded me of a project from the past two weeks.  Last week I was given a great lesson in construction in reverse fashion.

Because of pending regulations in the maritime zone of Nandayure Costa Rica, I had to tear down the thatched-roof rancho in order to move forward with a concession for new construction.   In four days, workers demolished a property that held almost ten years of Zeebra memories. END_OF_DOCUMENT_TOKEN_TO_BE_REPLACED

Who doesn’t enjoy a quick respite in a hammock?!

Time flies when we’re having fun, and the WordPress Weekly Challenge is here again!  This post brings you an image theme that represents Carefree.

A pictorial dictionary might use an image of a person in a hammock to illustrate the word, “Carefree.” Wilkipedia describes the hammock as “A sling made of fabric, rope, or netting, suspended between two points, used for swinging, sleeping, or resting.”

Enjoy these carefree hammock photos from my travels in Latin America! END_OF_DOCUMENT_TOKEN_TO_BE_REPLACED

Bob Ramsak, Car 54 Where Are You? Friendship, Piran Cafe

(Oops! Slow internet and power outages can frustrate one’s day, and both contributed to this post that was anxious to leap from the starting gate. The Preview and Publish buttons are too close together when one is working on a mini laptop! After the false start, it took another half hour to return to the edit page! For the next hour, I failed at uploading any new images. I resumed, worked with archive photos, and then the ‘Publish’ function would not work!  And then the page wouldn’t open.  And the email wouldn’t work.  Hobbling along, I”m hopeful to send this now! . . . Shall we continue?)

My father once stated, “Imagine how empty your life would be if no one called or came by.”

Every so often those words of wisdom echo back during specific moments, usually when society interrupts my day one time too many, and then I remember his words and am honored to have people in my life who care. On rare occasions my antennae tweak toward others when their usual habits suddenly change, which is what’s happened with Bob.

Bob Ramsak, our WP globe-trotting reporter, started his 18-month round-the-world journey in January 2013.  Working his way north north north from the tip of Argentina to the equator, (@Week 18!) he is now somewhere in Central America between Boquete Panama and Costa Rica. 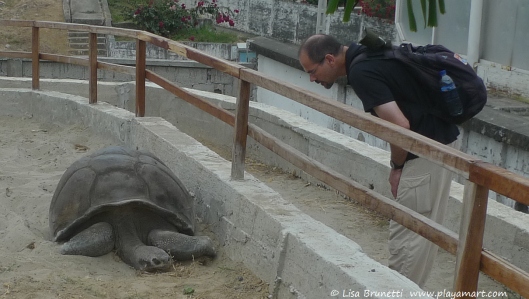 I’m talking about Bob, who schedules drafts to publish when he is in transit… Bob, who has been publishing shots of daily newspaper stands. Bob, who updates his location more promptly than a Timex!  Bob, who was supposed to leave Boquete last week and is still ‘pending’ (Top right on his homepage.) there in Boquete!

Inquiring minds want to know: Bob, are you going to choke me for my concern, or will you remind yourself that I care and hope that you’re ok?!!  Hopefully you’re out there and will approve of this post and the music!

Sisters Vania and ‘Silvana escort Bob via trek to the petite village of Amacora Ecuador.

Stepping back in time. Amacora Ecuador

Here’s Bob’s weekly recap from the time he spent along the line of the equator: Bootleg Barbies, Inauguration, Monsanto, Coolest Floor in the World. 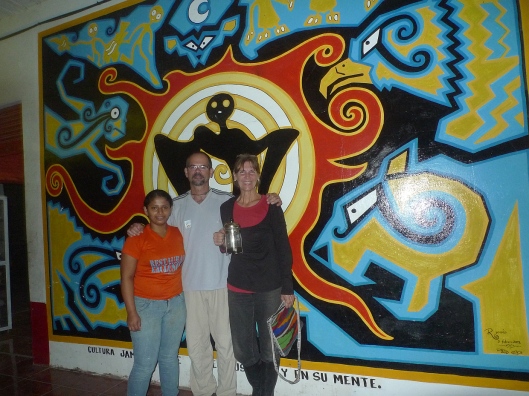 Bob’s visit to the Riverhouse and the Magic Carpet Hand-painted Floor!

Bob had plans to meet friends and family in Costa Rica, so I hope he’s tied up with reunions; it still seems odd that he hasn’t posted an update.

Have any of you heard from him this past week? A tweet, a like, a reply to a comment?   I’m considering firing up the flying carpet and starting a search party.