believe in yourself, painting watercolors of nature

“In order to succeed, we must first believe that we can.” Nikos Kazantzakis

Every so often Life presents tiny-yet-humbling gifts as if orchestrated strictly for my benefit. Sometimes it’s a mystical interaction with a bird – like when the pelican swam across the river, walked up the boulders where I was sitting – and gaped at me from about a meter away. Then it returned to the rio, swam back to the other side and joined its companions. Did they dare that pelican to interact with the human who fought to save their habitat?

A very long time ago in Louisiana, while making a farm-road detour around a fierce thunderstorm, I approached a rainbow not far from the malevolent clouds.  The left side of the rainbow grew closer and closer and almost touched the car.  Navigating an ‘S- curve’ very slowly, I noted that the rainbow came through the driver’s window – I was dumbfounded and full of bliss – driving slowly, trying to comprehend this rainbow in my lap while approaching another curve. As I turned slowly to the right, the other side of the rainbow came through the passenger window!  There I was with the left side of the rainbow in the driver’s window, and the right side streaming through the passenger side! 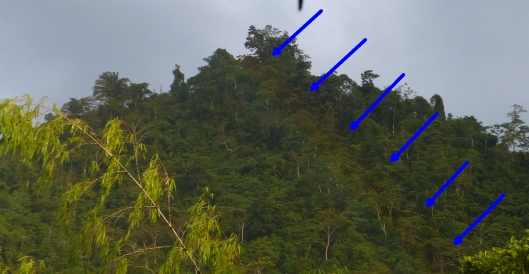 Trying to comprehend this unexpected gift, I exclaimed to the rainbow, to the entire universe, “Thank you thank you thank you” and pondered that no one would ever believe me if I shared what happened! I still marvel and wonder about the science that allowed that ‘just-for-me gift.’  When I emerged from the curve to the straight road, the rainbow stayed behind. Next was the intense rain – and ten or so minutes later, I was home.  The magic was gone, but never forgotten.

Other gifts are not so dramatic, but they leave behind an imprint of gratitude. My neighbor Melissa, with her natural aptitude for drawing and painting, showed me some of her latest work. It speaks for itself – and for her: END_OF_DOCUMENT_TOKEN_TO_BE_REPLACED