From the acoustic-friendly cushioned experience at Quito’s National Theater to a rustic sea-level setting on the beach at Bellavista/Don Juan, ArtesXManabi left a trail of beautiful memories.   Please visit their website and facebook pages, and give them a ‘thumbs up’ for their kind and generous efforts.  If you live in Ecuador, perhaps you can coax them to continue their show in your community!

The slideshows showcase the events, including one dance workshop – on the beach – with the children!
ArtesxManabi – Slideshows

Thank you, ArtesXManabi for your display of unconditional love for your fellow man.

QUITO, Ecuador – Life sometimes gives us sweet little packages wrapped in unique ways.  Because I planned to visit Quito’s Casa de la Cultura regarding the ‘on hold’ exposition of my paintings, I reviewed their website last week:  CASAdelaCULTURA

The ‘Events’ page mentioned a fundraiser for the coastal community of Don Juan, which is 10 kilometers from Jama in Manabi Province.  Casa Loca is about half way between the two areas!

Rio Jama’s “La Boca’ area – before the earthquake:  Can you spot Casa Loca?

A fundraiser for the community of Don Juan?  My imagination raced with possibilities as I tried to connect the WHERE with the WHO. Who inspired this, or was it a random and compassionate person or persons who visited Don Juan and realized they could use some support?

My plans were to be in Quito at Casa de la Cultura the same day the Las Artes por Manabí would be held at the National Theater!  After the meetings – which went very well, I inquired about the event.  Yes! It was scheduled for that night!

Friends Stephen and Xiomara joined me that evening, though we were not quite sure what we would be watching!  We gladly paid our ten dollars to help support the Don Juan community in the canton of Jama. 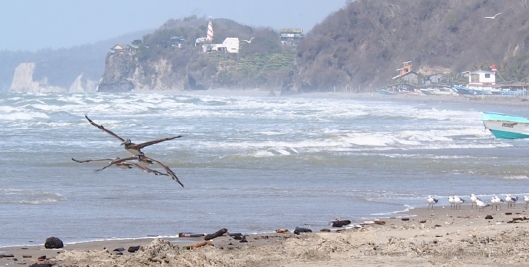 The show, which showcases Andean Contemporary Arts, started around 8 pm. Enrique Males, a popular musician, has been creating melodies for 50 years and calls attention to ‘cultural respect.’

“…His songs remember famous people of Andes. For example, the indigenous general Rumiñahui (from spanish conquerors of Quito, 476 years before) or Mama Dolores Cacuango, a political figure of 80’s that talked about human rights, but from the thoughts and traditions of indigenous communities.

With all this context, the performance tries to remind the people to love Allpa-Mama (Mother Earth), to be at peace with themselves and with each other.

The connection with Don Juan’s people is the joy for life, the desire to improve and be more sensitive and creative, using Arts and our ancestral culture to be a big family, from the coast (Jama) to the Andes (Quito). ” – Sayri Wladimir Cabascango – Las Artes por Manabí

Like thrilled children, we sat toward the front of the National Theater and looked forward to the show.

Image in the background is from a preColombian Jama Coaque Sello/Stamp.

Information about the community of Don Juan. 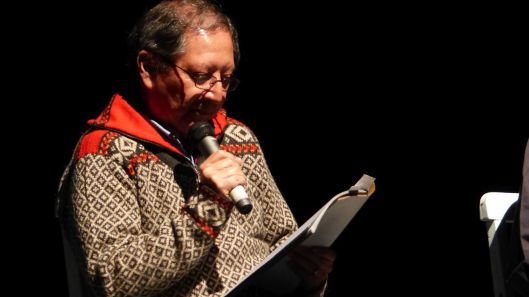 The stage went dark, and as our eyes adjusted, musician Enrique Males swept us into a magical realm.