Before: Mangroves on both sides of the house…

Once upon a time in 2008, magnificent mangroves cocooned the Casa Blanca (aka ‘Riverhouse’ and sometimes ‘Casa Loca”) on the last bend of Rio Jama… The few old photos of that house are not very good, but they show the essence of the area in 2008.   Note the trees on the both sides of the house.

Some of you are aware of last year’s loss of those mangroves that stood proud and tall downriver from the house.  An excavator arrived and began shoving the mangroves into the river.  Dump trucks stockpiled huge boulders to replace the trees and strong arm the river into submission, which distressed one artist, and to her dismay, no one else! 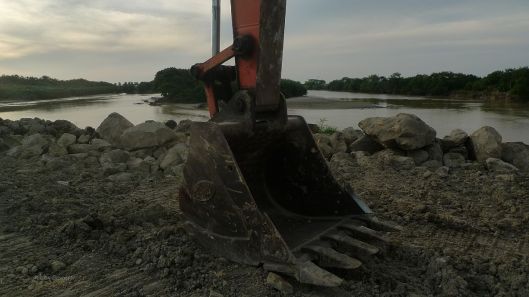 After- (After pushing down trees; after extinguishing power!)

Stockpile of boulders – a cluster of three mangroves was left… 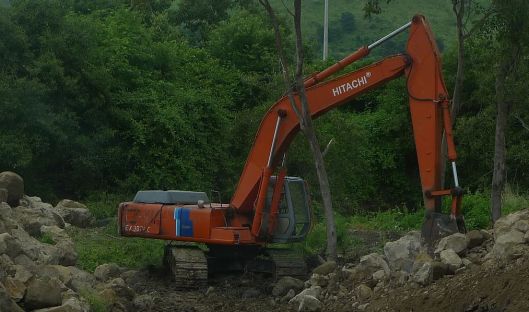 Please save those three trees, I pleaded. 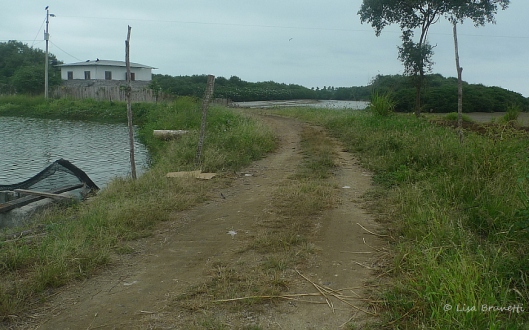 After the rainy season and after the excavator…

How delighted I was when nature bit back and said, ‘That’s enough!” END_OF_DOCUMENT_TOKEN_TO_BE_REPLACED

“…Paulo said, “I want you to pay close attention to the people who pass by.”

She did as Paulo had asked.  In the next half hour, only five people passed by.

She described the people in detail – their clothing, approximate age, what they were carrying.  But apparently that wasn’t what he wanted to hear.  He insisted on more, trying to get a better answer, but couldn’t do so.

“Okay,” he said. “I’m going to tell you what it was that I wanted you to notice:  All the people who passed by in the street were looking down.”

They waited for some time before another person walked by.  Paulo was right.

“Gene asked you to look to the horizon.  Try that.”

“All of us create a kind of ‘magic space’ around us.  Usually it’s a circle with about a fifteen-foot radius, and we pay attention to what goes on within it.  It doesn’t matter whether it’s people, tables, telephones, or windows;  we try to maintain control over that small world that we, ourselves, create.” 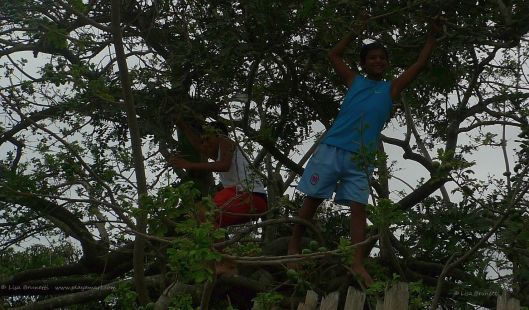 Let’s Be Wild prompts us to “Look Up” this week.  Photographers and artists often look way beyond that 15-foot circle mentioned in Paulo Coelho’s book, The Valkyries.     Sometimes we are rewarded with refreshing surprises, like these young boys scampering in the ‘jobo’ tree in search of ripe plum-sized fruits.
.
END_OF_DOCUMENT_TOKEN_TO_BE_REPLACED

How many birds?  Frigates, egrets, herons, cormorants, ibis, terns, ducks -and about 50 more call this last bend their home!

While flipping through photos, I realized how lucky I am to have sights like this every day that I am home on the river.  The 2013 rainy season kicked off with a strong start, so the river now resembles cafe con leche instead of the colors from a few weeks ago!   The bird life remains phenomenal, and how could I not share some images of those amazing birds that punctuate this last bend of the river ?! 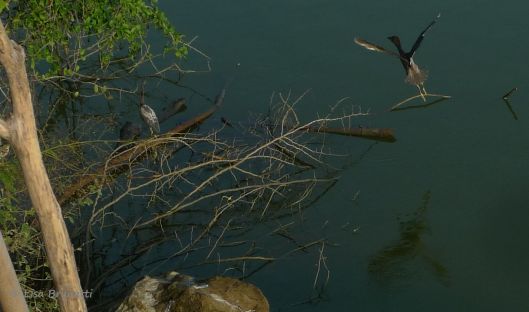 Those amazing frigate birds perch near the tops of the mangroves and suddenly leap into a swan dive that takes them near the surface of the water.  They might swoop lower in pursuit of fish, or they might soar high above and ride the air currents in lazy spirals throughout the day.  During nesting season, they often perch in the mangroves for most of the day. END_OF_DOCUMENT_TOKEN_TO_BE_REPLACED

I respect all who devote an entire day to counting as many species as possible:  I also encourage everyone to keep a pad handy and note the birds one sees from now until January 5th.

So what’s stopping you?  Peer out that window and start scribbling and see how many species live in your neighborhood!  Challenge your neighbors, your loved ones, especially the youth and direct them to noting the beauty of nature!

Here are some images of my neighbors the birds.

Hey guys! Check out the dame with the white plumas!

END_OF_DOCUMENT_TOKEN_TO_BE_REPLACED

* Republished due to technical difficulty.   Thank you, Word Press, for all of your help! Z

“The civilized man not only clears the land permanently to a great extent, and cultivates open fields, but he tames and cultivates to a certain extent the forest itself.  By his mere presence, almost, he changes the natuere of the trees as no other creature does… It has lost its wild, damp, and shaggy look;  the countless fallen and decaying trees are gone, and consequently that thick coat of moss which lived on them is gone too.”  Thoreau – Maine Woods

“If a man walk in the woods for love of them half of each day, he is in danger of being regarded as a loafer; but if he spends his day as a speculator, shearing off those woods and making earth bald before her time, he is esteemed an industrious and enterprising citizen.  As if a town had no interest in its forests but to cut them down!”   Thoreau Life Without Principle END_OF_DOCUMENT_TOKEN_TO_BE_REPLACED