WordPress Photo Challenge theme this week is Beginning, and many images jumped into my mind.  Short and sweet, here is one of a very tender moment in Costa Rica:

Several days after its litter mates scuttled to the ocean, this little survivor emerged from its shell after the exhumation of the nest. We watched this olive ridley hatchling awaken and instinctively head to the ocean. Hopefully it’s now thriving and telling its story of rescue! Perhaps it’s saying, “Not all humans are ignoring our plight!”

This little turtle will slowly reach maturity in a dozen or so years, when it will return to its beach of origin to play its role in breeding and keeping its species from becoming extinct.  Thanks, all of you who helped the Eastern Hawksbill Turtles win the competition’s grand prize! Ingrid and Alex were thrilled that the turtles’ cheering section kept them in the lead!

“Lisa, she’s going to get you!’ (Getting sand in my face and in the camera was worth it; well except that my camera still reminds me of my sin)

I first met Ingrid Yañez at Playa San Miguel Costa Rica when she was in charge of the sea turtle project for Pretoma, an organization dedicated to protecting sharks and sea turtles.   After few years later,  work took her elsewhere, but we have stayed in touch.  I sometimes lob updates to her about my sea turtle encounters, and she shares news about her efforts (with her husband Alex Gaos) in saving the rapidly-declining populations of sea turtles.  They are presently working diligently in conservation for the highly-endangered hawksbill turtles. (ICAPO)

Their enthusiasm is infectious about recent discoveries: “Prior to 2007 hawksbills were thought to be essentially extinct in the eastern Pacific…they have been documented using cryptic nesting sites, often located inside estuaries, where they come ashore behind stands of mangroves to deposit their eggs.  They also use these in-land mangrove waterways to forage. “

Eureka! Mangroves?!!! Could that have been one of the last few hundred hawksbill turtles in front of the house yesterday? END_OF_DOCUMENT_TOKEN_TO_BE_REPLACED

Ailsa’s theme for this week is beaches, and I am blessed to have spent a large part of the past dozen years along the beaches of Central and South America.   This post reflects the rewards of visiting the beach in the magical hours at the beginning and end of each day. 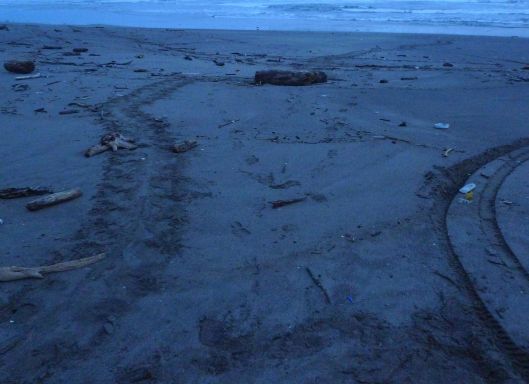 The ocean often tosses more than driftwood on the beaches.

Turtles die from boats trawling too close to shore with illegal shrimp nets. This is wrong.

During one rainy season at Playa San Miguel Costa Rica, the resident marine biologist flagged me down about an hour before sunset, “Lisa! There’s a turtle nesting!”   END_OF_DOCUMENT_TOKEN_TO_BE_REPLACED

He sails through the air with the greatest of ease! (Costa Rica Howler Monkey)

Many of my posts from 2012 featured encounters with nature from my life of total immersion in Costa Rica’s dry rain forest.  The howler monkeys taught me the nuances of their communications; the trusting little ones often scampered down the tree limbs to get a closer glimpse at the strange two-legged creature that sometimes spoke their language! END_OF_DOCUMENT_TOKEN_TO_BE_REPLACED

An Olive Ridley Sea Turtle Egg;  What are its chances of survival?

Happy New Year, everyone!  I am so honored that one of my images won Let’s Be Wild’s ‘Exploration’ category.   See the image HERE.  This week’s photo challenge (ending today!) is “New Beginnings.”   Let’s go once again to Playa San Miguel, Costa Rica and watch the olive ridley sea turtles’ new beginnings. 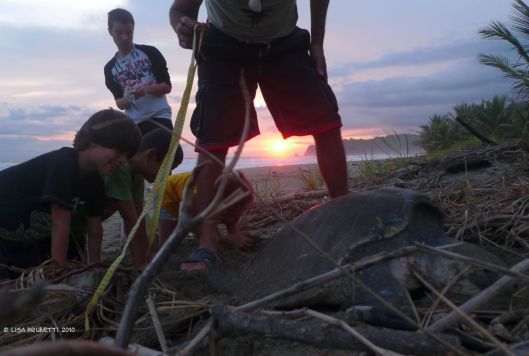 While the female turtle is in her egg-laying trance, the biologists record data then transfer the eggs to a nursery.

The eggs are buried the same depth as the turtle’s original nest.

In 40 to 60 days, the magical awakening begins, and the hatchlings quickly find their way to the surface and follow the call of the ocean. END_OF_DOCUMENT_TOKEN_TO_BE_REPLACED

These images show olive ridley sea turtle hatchlings experiencing the dawn of their first day of life.    The little one below has just emerged from its nest at a nursery at  Playa San Miguel, Costa Rica.

It’s fascinating to watch the little ones emerge from the sand; they immediately turn to the sound and aroma of the ocean and follow its call. END_OF_DOCUMENT_TOKEN_TO_BE_REPLACED

WordPress Weekly Challenge asks for examples of Delicate.  Before reading the text, I thought of the delicate texture of hibiscus blossoms that often find their way into my food and drink!

While waiting for the post to load (connection speeds are often brutally slow here!) I pondered a more serious post that addressed the delicate balance between man and nature.   The story is here:  A FRAGILE BALANCE – The Decline of the Olive Ridley Sea Turtle.

The delicate balance between man and nature often causes dysfunction between  the rights of nature versus modern progress.  Here are a few examples that balance moments I’ve sadly witnessed against others that give hope. END_OF_DOCUMENT_TOKEN_TO_BE_REPLACED