“You will fail many times but in failing you’ll learn and in learning you’ll find your way. Remember, there are no mistakes in life but only lessons, and lessons will keep on repeating until learned.”  Paulo Coelho

I’ve been quiet, but that might mean that I’ve been busy!  Are you curious?!

Mindo Ecuador – The tragedy of last year’s earthquake has had an unusual effect on me;  my patience and tolerance, thanks to several challenging lessons, have strengthened.   A project-in-progress for the ‘Artist’s Nest’ has tested that statement!

Two local workers have been helping with a 3-day project that has stretched into eight.   If I sweep the sawdust and debris five times, there’s always a sixth, and most likely a seventh, though at the end of the day these two sweet workers clean the entire area well before leaving.

When I grab the broom to sweep the steps yet again, I find that I don’t sigh and say to myself, “Again…” or get frustrated at redundant tasks.  I think, “What those people who have no home would do to have this problem!”       In addition to lessons learned via my nephew Don, “While the Worlld Outside My Window Goes Insane”   , I think of those on the Pacific coast that lost so much, and I ‘Let it go’ instantly.

Whoosh!  Gone.  Not worth it.  That post (above) connects me back via the photo tribute to Don;   with 124 comments, it’s surely one of the most popular ones for inspiration.

And the lack of stress and frustration is genuine! There’s no psyching myself into trying to dump the stress; it’s never allowed residence or even a Timeout Corner as each day brings new surprises.

Measure twice – cut once. I watched as they measured, stated outloud the measurement, then the apprentice went outside to cut the section. He returned and —- “Whoops…”  he cut it at ’06’ instead of ’16.’  No problem – he learned an easy lesson! They lengthened it with a second section and wired the two together.

The workers are so kind and sweet, and Perejil (a nickname) does amazing work.  He’s very patient and goes to great details, so the work has taken longer than expected.   It’s worth the extra days, and in the story of my day, my week, my life, what is important is the quality of each day — and each day as been crammed with positive experiences.

Are you curious to see the project in progress?  Put on your hard hat, as there’s no hand rail, the main reason this project began!

“Toleration is the greatest gift of the mind; it requires the same effort of the brain that it takes to balance oneself on a bicycle. Helen Keller 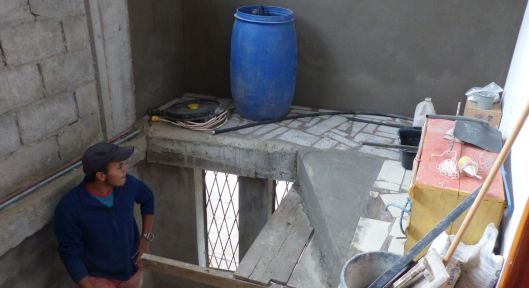 That upstairs space was bit dangerous; we tossed around ideas for a safety rail.  The middle ‘corner’ sectionwas added to eliminate a cramped corner.

Because the colorful sections of bamboo were over a month old, it would be difficult to cut them for the handrail.   Perejil suggested (almost begged) to use newer material and paint it last.

But Boss! Do you know how much time I spent prepping that material?

The sections were ready, complete with a non-yellowing varnish.  We exchanged ideas, and after witnessing the first post get butchered, I respected his feedback!  There would be new options and ideas before this project was finished!     We moved forward in full-throttle mode.

Since others have to tolerate my weaknesses, it is only fair that I should tolerate theirs.” — William White 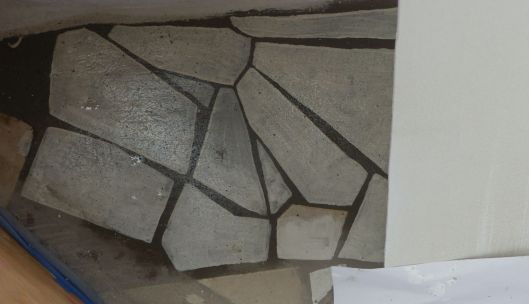 The odd corner was widened, and I worked one night to experiement with a hand-painted mosaic that had not completely dried when the workers arrived the next morning.  (It’s been raining a lot!)

I painted it without knowing that they planned to custom cut a section of the just-painted concrete wall to install a corner bench!

I promise, seeing the debris on the painted mosaic did not bother me!  Several more layers of paint will be needed before it’s finished, so it will look more weathered and not so new!  (Although he brought his own tools, they enjoyed using my hammer!)

Some days I prepared a late brunch, and other days an early-afternoon lunch.  While eating, we sat in the work area and discussed the project, then swapped stories about our lives.

“Don’t be in a hurry to condemn because he doesn’t do what you do or think as you think or as fast. There was a time when you didn’t know what you know today.” Malcolm X 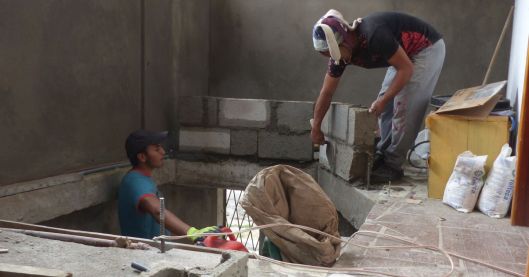 I was the student and learned a lot by watching them work. 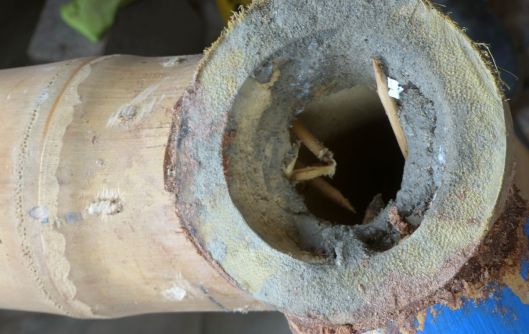 More on those skewers later! 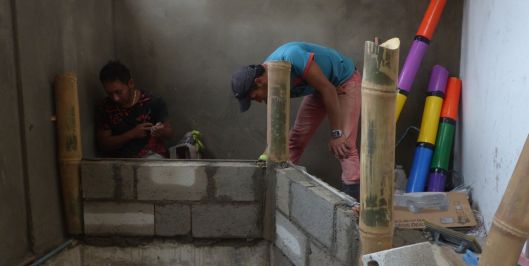 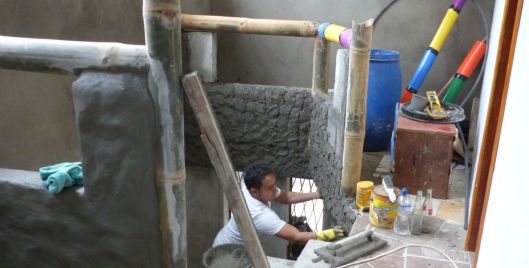 “Tolerance is giving to every other human being every right that you claim for yourself.” – Robert Green Ingersoll

Each afternoon we enjoy a cafe con (Pacari) chocolate and milk break; yesterday they were surprised with fresh Chocolate Crinkle Cookies…

“We are human. We are not perfect. We are alive. We try things. We make mistakes. We stumble. We fall. We get hurt. We rise again. We try again. We keep learning. We keep growing. And we are thankful for this priceless opportunity called life. ” Ritu Ghatourey

While they worked on the safety rail area, I worked in the next room on this acrylic painting on a panel of drywall. 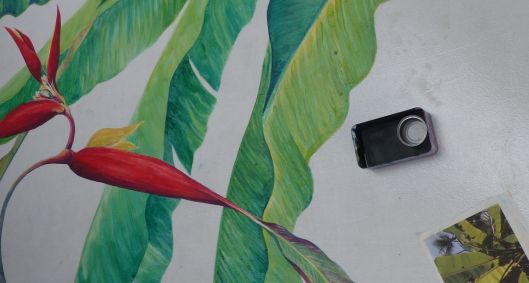 They were surely curious to see where this fit into the plan!

“What significance is that?” people ask. “Recycling!” I reply!

“Tell me and I forget. Teach me and I remember. Involve me and I learn.” – Benjamin Franklin

Acupuncture? Perejil used bamboo skewers to stengthen the joints. Each post was filled with cement.

I learned about the final finish on the concrete floor.

Perejil was meticulous, even when installing a ‘simple’ board for a bench!

After the planks were installed, the gaps were filled with cement. Those boards could support an elephant! 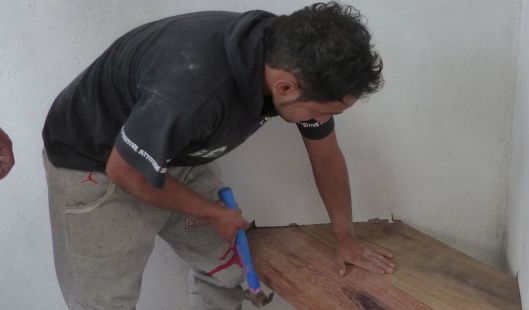 He is so meticulous!

The bench will have a backrest…. 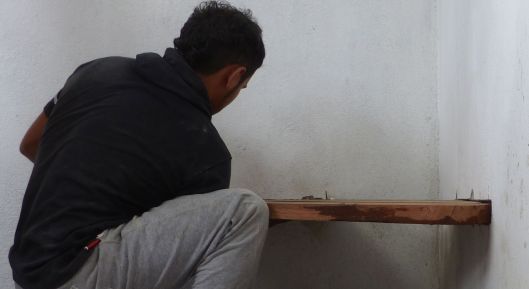 The far side is narrow, and this corner now holds a second bench. 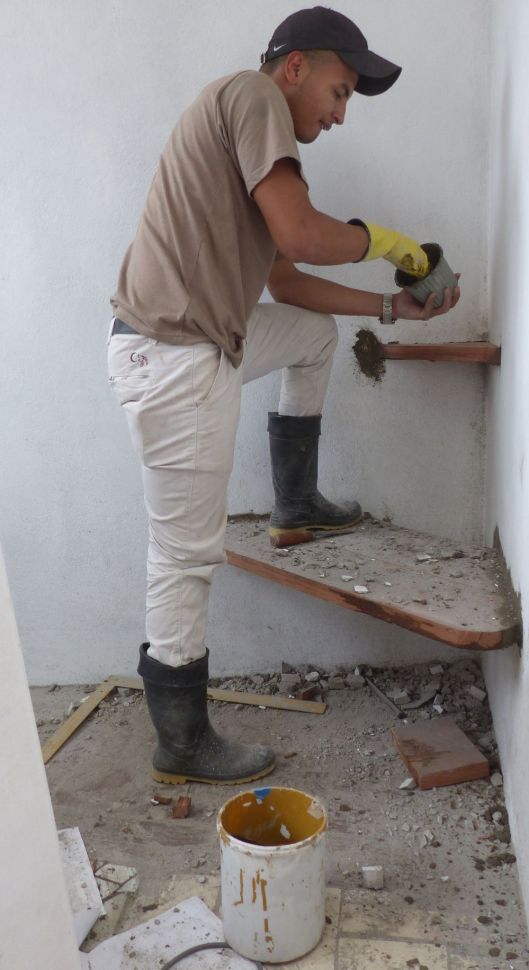 And to think that the area was spotless when the day began! That’s ok, as the area is going to be quite enjoyable, and in another week, this mess will be history.

Hey! Looking up from downstairs, one can see progress!

Because painting the floor teased the chikungunya side effects into tormenting my back, dear Francisca and Leida invited us to have lunch with them.   They own a small store and also own the apartments!  They are very pleased with the changes!

Did it have an accident, or did it hatch with this deformity? 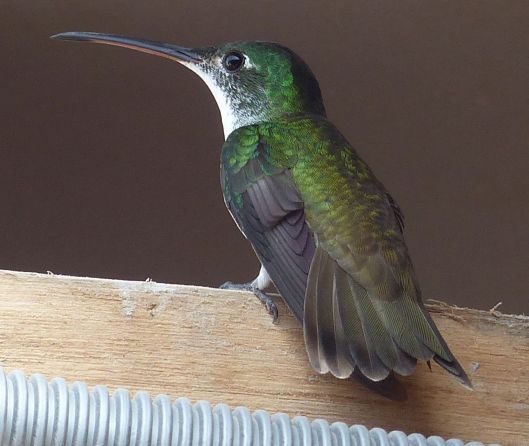 Several visitors have already stopped by to see the changes!

Family-member Candy, who lives on the first floor, asked, “When will the workers be finished?”

With a grand and dramatic smile, I replied, “Nunca!  Never!”   Each day brings more details!   Most likely they will finish today, and I’ll be able to paint those posts!  It will be fun to share the ‘finished’ results –  most likely by Monday.

See you with those photos soon!

41 thoughts on “No Mistakes – Only Lessons”